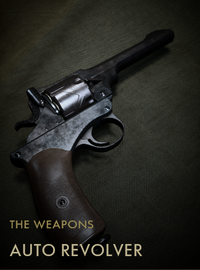 The Auto Revolver was a novel design that attempted to combine the rapid fire of the automatic pistol with the heavy .455 cartridge of the British service revolver. The Auto Revolver was invented by British Colonel George Vincent Fosbery and patented in 1896, during a time when most pistols were chambered for much smaller cartridges, but Fosbery believed that these calibres were too weak for combat.

A traditional revolver uses the trigger pull to cock the hammer and rotate the cylinder which makes the trigger pull quite heavy. The Auto Revolver instead uses the recoil energy to let the barrel and cylinder slide back while a cam pin runs into the grooves on the cylinder, making it rotate and re-cock the hammer. The design provided the intended benefits of a high rate of fire and some absorbed recoil, but the mechanism was more sensitive to dirt than traditional revolvers.

Fosbery's Auto Revolver went into production in 1902 and was available in .455 and .38 calibres, but the vast majority of the almost 5000 guns that would be produced up until 1924 were in .455 calibre, then with a 6-round cylinder. The Auto Revolver was submitted to military trials but never officially adopted. It was a relatively big and heavy handgun, which was probably part of the reason. Nevertheless, the Auto Revolver did become popular with some target shooters, and in a time when Army officers picked their own sidearms, quite a few British officers would pick the Auto Revolver.

It saw some action in the Second Boer War, and in WW1 it was also used by pilots before machine guns were commonplace on aircraft.

Retrieved from "https://battlefield.fandom.com/wiki/Auto_Revolver_(Codex_Entry)?oldid=343168"
Community content is available under CC-BY-SA unless otherwise noted.