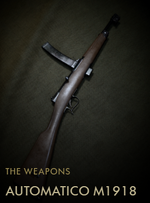 The Automatico M1918 was the first conventional submachine gun to ever be issued to regular troops, and according to some sources the weapon predates the more famous MP18. The fire-rate was a formidable 900 bullets per minute - or 15 bullets per second. This rapid-firing gun was reported as both durable and reliable and some even saw action during WW2. It is a formidable trench cleaning tool.

Retrieved from "https://battlefield.fandom.com/wiki/Automatico_M1918_(Codex_Entry)?oldid=344446"
Community content is available under CC-BY-SA unless otherwise noted.