The M1918 BAR (English: Model 1918 Browning Automatic Rifle) was an American automatic rifle designed by John Browning in 1917. It was first used in the final stages of World War I by the United States Military. By the time of World War II, many variants were imported to other Allied factions. It fired the .30-06 Springfield cartridge from a 20-round magazine at a rate of fire of 350-600 rounds depending on the variant with a range of around 100–1350 meters.

Bar1918
The BAR 1918 is an Assault Rifle in Battlefield 1942 issued to the British Army, United States Army, USMC and Free French Forces Assault kit; previously the Red Army Assault kit was issued the BAR 1918 pre-patch 1.45v before being replaced by the DP.

With a high power round capable of 3-5 shot kill to the torso and two shot kill to the head; but have high recoil and in some cases Damage dropoff to contend to. They perform better at longer ranges and in the crouch and prone position compared to SMGs rate of fire and spread increase cant perform as well at that range. While longer ranges they may fall to Standard Issue Rifles or Sniper Rifles, they can still perform adequate enough to challenge them.

The BAR 1918 has a 480 RPM (second lowest of the Assault Rifles and overall average) and a 20-round magazine with six magazines totaling 120 rounds in reserve theoretically. The BAR possess the highest damage of its class at 9 damage which can kill most damaged opponents as long as they are below 28.8 HP in two shots. Like most other Assault Rifles, the BAR 1918 does not suffer from damage dropoff. Its has the lowest magazine capacity and below average reload time at four seconds.

When compared to the StG-44: The StG-44's higher rate of fire by 60 RPM and same bullet to kill gives the StG a slight edge at close range assuming both targets are at max health. The StG-44 reload is .2 seconds quicker than the BAR but is barely worth noting. Recoil and spread wise: both are identical in almost every aspect except concerning prone deviation in which the BAR has .5 deviation with the StG having a .6, making the StG slightly less accurate when proning. 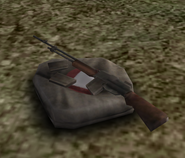 The BAR 1918 with the Assault kit pickup

American Marine armed with a BAR 1918.
Add a photo to this gallery

The BAR 1918 is a weapon featured in Battlefield Vietnam in the official WWII Mod as an option to the United States Marine Corps' Assault kit. It has a different model and animations from the Battlefield 1942, but uses the same sounds and is essentially the same weapon.

"The BAR is a light and effective machine rifle with a smaller magazine compared to other LMGs. It saw action in the fall of 1918."

The BAR M1918 is a weapon featured in Battlefield 1 for the Support kit.

Three variants are featured in multiplayer for the Support kit: Trench, Storm, and Telescopic.

The BAR M1918 Trench is the first available variant for unlocking. Like the rest of the Trench variants, this one has increased hipfire accuracy.

The BAR M1918 Telescopic has a bipod and a telescopic scope for long range engagements.

The weapon is best suited for close to medium range engagements with a slightly more aggressive approach than other LMGs due to its smaller magazine which reduces its effectiveness as a point defense weapon; this is offset by its high damage, fast rate of fire and good hipfire accuracy. It can still be effective at longer ranges due to its high velocity, low damage falloff and the ability to switch to semi-automatic fire.

Preparing to pull back the charging handle

Inserting a new magazine
Add a photo to this gallery

-0.106
6.375
"Shortly before WWII, the US Army updated the BAR to the M1918A2. One of the more significant changes made was the replacement of the select fire switch with a rate of fire selector allowing automatic fire only at either a fast or slow cyclic rate."

The BAR M1918A2 was introduced on May 23, 2018. The weapon is unlocked for use after pre-ordering the online standard or deluxe editions of Battlefield V on any platform. As its name suggests, the firearm is based upon the BAR model fielded in World War II; also evidenced by the smaller, scalloped handguard and integrated bipod.

Statistically, the weapon functions as a Low Weight variant of the standard BAR M1918. As with other Low Weight firearms, the M1918A2 recovers both spread and recoil faster compared to the M1918 variants and comes equipped with a bipod.

The BAR M1918A2 has no visual customisation options outside of choosing between iron sights and AA sights. Additionally, none of the BAR M1918 skins can be applied to the BAR M1918A2.

Switching to fast rate of fire

War In The Pacific

0.760
0.350 ┴ 0.350
"An updated version of an automatic rifle that was developed during the Great War. The new version made reloading easier and could be used with a bipod."

The BAR M1918A2 is a weapon featured in Battlefield V that was introduced in Tides of War chapter 5, War In The Pacific. The weapon could be unlocked upon completion of week seven challenges. It also may now be purchased for 1,700 Company Coin.

The BAR is a notably versatile weapon, possessing a unique trait amongst Light Machine Guns in its fire selector that allows the user the choice between a higher or lower rate of fully-automatic fire. In its default mode, the BAR fires at 720 RPM, giving it the highest rate of fire of all LMGs and a correspondingly low Time-To-Kill in close quarters. Accuracy during fully automatic fire is however unpredictable in this mode due to the weapon's high vertical recoil and unusually strong horizontal recoil. Sustained fire is also not possible due to the small magazine size of 20 rounds, tied with the FG-42, LS/26 and Chauchat for lowest capacity in its category, as the high fire rate can empty magazine very quickly and leave users vulnerable to attack.

Ammo conservation, as well as controllability at medium range, can be more easily managed by switching to the lower ROF mode, which slows rate of fire to 550 RPM. Although both modes share the same recoil characteristics and 4-7 hit killing potential of the generic LMG damage model, the lower rate gives more time for recoil to settle between shots, thus leading to greater damage consistency when engaging distant targets. If users regularly switch between modes depending on the situation, this unique utility essentially allows the BAR to behave as two weapons in one - an aggressive CQB LMG comparable to the FG-42 in High ROF mode, and a highly controllable long-range LMG comparable to the Bren Gun and Madsen MG in Low ROF.

Its Specialization tree allows one to improve its close range or ranged capabilities. Its Tier 1 specialisations feature Fast Reload or Quick Aim, the former useful given the frequency of reloads when using the High ROF mode. At Rank 2, Enhanced Grips improves hipfire accuracy while Ported Barrel reduces horizontal recoil to 0.280. Rank 3 provides further, general hipfire stability with Polished Action and Custom Stock, with the last specialization choice being between ADS speed and stationary accuracy.

Changing the BAR's rate of fire.

The BAR with its bipod deployed.

Inspecting the left-hand side of the BAR.

Inspecting the right-hand side of the BAR.

Pacific Palm skin
Add a photo to this gallery

Retrieved from "https://battlefield.fandom.com/wiki/BAR_M1918?oldid=376267"
Community content is available under CC-BY-SA unless otherwise noted.