BAR M1918 is a Codex Entry featured in Battlefield 1. It is unlocked upon obtaining 10 kills with the BAR 1918. 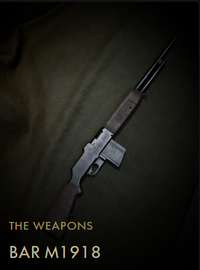 The legendary BAR M1918 was America's answer to the light, portable machine rifles of WW1. When the US entered the war it had far too few machine guns, so the War Officer requested native designs. In early 1917 the BAR was demonstrated and was so impressive that the goverment immediately awarded it a contract. Tens of thousands of M1918s were ordered, but most of America's gun manufactures were already very busy producing other arms and materials for the Allies, leading to delays in production.

By July 1918 the BAR had started to appear in France, and it was used extensively in the Meuse-Argonne offensive in September. The war was drawing to a close, but the BAR had made a huge impression on the Allies and they too ordered it in great numbers.

Similar to other light machine guns of the time, the M1918 was intended to provide fire support during an assault, by being fired from the shoulder or the hip - called "Walking Fire" at the time. There was even a special belt for the BAR, where the shoulder stock could rest in a holder on the hip.

Although an impressive weapon in many ways, the M1918 was considered too heavy for an automatic rifle, and having a magazine capacity that was too small for it to be an effective squad support weapon. Nevertheless, it was officially adopted in 1938 and went on to serve in WW2, Korea and Vietnam.

Retrieved from "https://battlefield.fandom.com/wiki/BAR_M1918_(Codex_Entry)?oldid=343135"
Community content is available under CC-BY-SA unless otherwise noted.