BL 9.2 Siege Gun is a Codex Entry featured in Battlefield 1. Introduced in the They Shall Not Pass expansion, it is unlocked after obtaining three kills with the BL 9.2 Siege Gun. 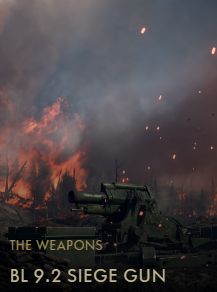 Artillery was the most dominant of all weapon types in WW1, being the cause of the iconic destruction of the landscape, the reason for the digging of the trenches as well as the inflictor of by far the most casualties. As trench warfare settled in, heavy siege howitzers answered a particular new need of high angle, accurate long range shots dropping almost vertically onto enemy positions from a stable firing position in the rear. These siege howitzers were also used for battering permanent fortresses, and counter-battery fire.

The principal heavy siege gun of the British Army in QQ1 was the BL 9.2 inch Howitzer, developed in 1913 and the first prototype, "Mother", seeing action with the BEF from October 1914. In 1900 the British Army had purchased Austrian 9.45 inch (21 cm) Howitzers from Austria for use in the Second Boer War, and the British soon decided to develop their own heavy gun. The resulting BL 9.2 inch Howitzer was tested in July 1914 with glowing reviews, and 32 of the guns were soon ordered. The BL 9.2 was the first movable gun to feature a hydro-pneumatic recoil system with a floating piston, and it could launch a 132kg projectile almost 10 km. It was possible to fire two shells within one minute, although this rate fo fire could not be sustained.

The BL 9.2 produced a massive blast, and on one occasion in 1916 when an Australian chaplain got too close to a firing howitzer, he was lifted violently off his feet and thrown to the ground. Gunners did not wear any ear protection, however, and usually ended up suffering from deafness. The BL 9.2 had a crew of 14 men, and the process of setting up a firing position for the gun could take days in muddy conditions. It weighed 12 tons and was moved in three separate wagons, pulled either by horse-teams or Holt caterpillar tractors.

Artillery technology and tactics developed rapidly, and by the end of WW1 it had become an exact science that played a huge role in achieving the war-winning breakthroughs, with guns of different sizes firing a range of shell types in complex coordination. The heavy BL 9.2 fired mostly high-explosive shells, but armor piercing rounds were also used, and mustard gas shells for the gun were introduced in 1918. There were also many different fuse types, with the instant graze fuse being an important development, instantly detonating the shell above ground rather than after burrowing down. Overall more than three million BL 9.2 shells were expended during the war.

The British had deployed 450 of the BL 9.2 inch Howitzers by the end of the war, and it stayed in service into WW2. The gun was also used by USA and Russia in WW1, with the Soviet Union later using the BL 9.2 in the Finnish Winter War.

Retrieved from "https://battlefield.fandom.com/wiki/BL_9.2_Siege_Gun_(Codex_Entry)?oldid=343210"
Community content is available under CC-BY-SA unless otherwise noted.