See BTR for other vehicles with the same prefix

The BTR-90 is a Russian 8×8 wheeled armored personnel carrier, designed in 1993 and produced in limited numbers, it is a larger version of the BTR-80 vehicle, fitted with a BMP-2 turret. Like other BTR-type vehicles, it's a lightly armored infantry fighting vehicle most often employed in the transport and support of infantry, similar in role to the MOWAG Piranha series of vehicles and its many derivatives, which includes vehicles like the LAV-25. The BTR-90 is equipped with an array of weapons, including an autocannon, coaxial machinegun, grenade launcher, and anti-tank guided missile. Although it was designed in the mid-1990s, the system did not see full-scale production until a decade later, and has seen only small-scale, limited production runs since 2004.

The BTR-90 appears in Battlefield 2 as the IFV used by the MEC, Spetsnaz,MECSF and Insurgents Forces. Its US/UK/EU and PLA counterparts are the LAV-25 and the WZ-551, respectively.

Despite filling the same role, there are some differences compared to its counterparts: 1. The 2A42 cannon of the BTR-90 has the highest rate of fire out of the 3 IFVs - the M242 Bushmaster on the LAV-25 has a lower rate of fire, while the ZPT-90 on the WZ-551 has the lowest fire rate. Its overheat and cooldown rate is also the best out of the 3 cannons: it takes the same time for the 2A42 to overheat as the M242, which is longer than the ZPT-90, but the 2A42 cools down quicker than the M242, taking the same time as the ZPT-90 to cool down. However, this rate of fire and overheat/cooldown time is balanced out by its explosive shells' lower damage and blast radius: The 2A42 deals the lowest direct impact damage and its shells also have the lowest blast radius compared to those of its counterparts. Its muzzle velocity of 375m/s is tied with the M242 Bushmaster and is slightly lower than the ZPT-90's velocity of 400m/s. 2. The BTR-90 has no rear-facing gun ports, all of its gun ports are located on the sides, as opposed to the LAV-25's two and the WZ-551's one. This means that the BTR-90 is more vulnerable to infantry attacks from the rear, and considering missile impacts from the rear deal more damage, the BTR-90 is at a disadvantage compared to its counterparts. 3. The BTR-90 has the longest length out of the 3 IFVs, being longer than the LAV-25 and WZ-551, and its height is also greater than that of the LAV-25 while still slightly lower than the WZ-551, meaning it is easier to get spotted and shot. Its height also means it cannot engage close-in infantry as easily as the LAV-25. Its remaining stats are identical to its counterparts, however. The secondary weapon of the BTR-90 is its 9M113M Konkurs-M (NATO reporting name: AT-5 Spandrel) missile launcher. 9M113M missiles can be used to effectively engage enemy armored vehicles, and only 2 are needed to destroy an APC. In fact, the missile projectile is shared across the 3 IFVs and is referred to as "tow_missile" in the game file, hence the identical performance across other vehicles in the class. If possible, the player should always target enemy vehicles from the sides or rear, as armor as these locations are weaker, and the player is able to deal higher damage with their missiles as a result. The player should never use the 9M113M against infantry, due to its low blast radius and the player is given only 6 missiles to start off with, effectively wasting ammunition and precious time to reload an another one.

The BTR-90 can carry 4 passengers, with each passenger having access to a firing-port mounted automatic rifle (referred to as "Firingport_AK" in the game file) that has 500 rounds of ammunition and there are no reserve ammunition. The weapon is accurate, especially when fired in short bursts, but it accuracy quickly deteriorates with prolonged automatic fire. The weapon also has an overheat threshold, and will overheat after about 5 and a half seconds of continuous fire, further disecouraging players from spraying with the weapon.

The BTR-90 is amphibious, allowing it to cross lakes, rivers, or other bodies of water too deep for other vehicles to travel. However, its swimming speed is very slow, much slower than those of RHIBs and PWCs, and also slower than its ground travel speed. Also, its cannon doesn't have too high an elevation, so the player should be mindful about enemy helicopters and potential ambushes from above, where its armor is also weaker. It is entirely possible to engage enemy helicopters, but only if done so from afar, or if the player is on a slope, but this is an extremely risky move, as attack helicopters can easily destroy the BTR-90 from a distance. If possible, the player should avoid confrontation with already airborne attack helicopters at all cost, unless as a last resort, and leave them for friendly mobile air-defense vehicle and aircraft.

The vehicle should be used for its intended purpose: A well-protected infantry transport platform, with heavy weaponry and anti-armor capabilities to temporarily and briefly hold itself against main battle tanks, and its amphibious capabilities allow it to possibly infiltrate enemy lines by deep rivers or lakes where enemies might not expect. Main targets for the players are light vehicles and other APCs, while tanks can be engaged if the conditions are suitable. The player is also able to provide cover for dismounted infantry with their weaponry. With a good team, the vehicle can quickly move to the battlefield unobstructed and capture control points before the enemy is able to send down an artillery barrage at the flag in a safer manner compared to Vodniks or FAVs. Or the player can help destroy enemy tanks by damaging them with the vehicle's 9M113M missiles. The vehicle can also act as a mobile repair station/ammunition resupply vehicle/ambulance if it carries Engineers/Supports/Medics inside.

The BTR-90 was an Armored Vehicle in Battlefield Play4Free. Its American counterpart was the LAV-25. Its main weapon was a 2A42 30mm Chain Gun which did 60 damage; the alternate weapon is a 9M133 Kornet unlockable via Training. It also has four passenger seats armed with light machine guns.

The BTR-90 makes a return in Battlefield 3. It is one of the four new vehicles that come with the Back to Karkand expansion pack. According to the description, the BTR-90 can withstand the impact of 14.5mm projectiles as well as small arms, grenades, and smoke-screens. It is issued to the Russians as their IFV. BTR-90 is amphibious like other IFVs. The second passenger uses the KORD machine gun on top, other passengers may fire light machine guns with unlimited ammo through the firing ports and still be completely protected. Unlike the BMP-2, it cannot turn while stationary since it is wheeled rather than tracked, though it also has better acceleration and handling than the BMP-2. It plays the counterpart role to the LAV-25, with very similar handling, as well as a number of other cosmetic similarities.

The 25mm HE Shells for the cannon are unlocked by default as the primary weapon for the vehicle, providing an excellent effect against dispatch of individual or groups of infantry due to its splash damage. The magazine is limited to 6 rounds per reload however.

For the vehicle's secondary weapon, the ATGM in the form of the mobile-version of the 9M133 Kornet provides the vehicle with a more power weapon to fend or attack armored targets, excellent for medium and long range engagements, unlocked at 5200 points. Unlike the APFSDS-T Shells, the ATGM can be neutralised by Reactive Armor. The Guided Missile unlocked at 74000 points, functions somewhat similarly, allowing the operator to lock on and fire a missile which guides itself towards hostile vehicles. For added effectiveness against infantry, the BTR-90 operator can choose to equip a Coaxial LMG, utilising it as a back up when the main cannon is undergoing a reload phase but leaving the vehicle more vulnerable against enemy vehicles. APFSDS-T Shell provides an excellent middle ground weapon and back-up to the main cannon ammunition, able to disable all types of vehicles with heavy damage with a single magazine expense and not negated by Reactive Armor.

For countermeasures, IR Smoke is unlocked at 800 points, which temporarily spoofs and jams enemy lock-on weapons and can hide the vehicle from enemies, even against Thermal Optics temporarily. Zoom Optics provide the operator a more accurate sighting to dispatch targets at longer ranges and when paired with the higher-velocity APFSDS-T Shells, the vehicle can be utilised into an effective Sniping Rifle.

The gunner is always armed with a secondary heavy machine gun turret, and can equip one of three passive Specialisations including Thermal Camo, Proximity Scan and Maintenance.

It spawns on Gulf of Oman only in normal Conquest, not Conquest Assault, and on console it spawns only at the Russian home base and D point, and not at any other location; furthermore, it does not appear on Strike at Karkand or Sharqi Peninsula at all.

View from the load-out screen (all specializations visible).

The BTR-90 returns in Battlefield 4. Its basic functions and aesthetics are similar to its previous installment.

The 25mm HE Shells for the cannon are unlocked by default for the vehicle, or can equip APFSDS-T Shells for a more effective anti-vehicle role or Canister Shells for a more anti-infantry orientated role once unlocked respectively. APFSDS-T shells travel at an increased velocity and deal higher damage against vehicles, but do not deal any explosive splash damage of the 25mm HE Shells. Canister shells act like a shotgun, dealing damage in a spread, effective against infantry and light vehicles, but are ineffective against heavy vehicles. All shells from the main cannon are loaded in twelve-round salvos.

For the vehicle's secondary weapon, the Coaxial LMG is unlocked by default, and can be used against infantry and light vehicles. Alternatively, for anti-armor purposes, the TOW Missile or Zuni Rockets can be equipped. Zoom Optics are unlocked by default, but may be replaced with IRNV Optics or Thermal Optics.

For countermeasures, IR Smoke is unlocked by default, which temporarily spoofs and jams enemy lock-on weapons and can hide the vehicle from enemies, even against IRNV or Thermal optics temporarily. The Fire Extinguisher can help the vehicle recover from being disabled. The Smokescreen does not counteract lock-on or thermal imaging, but provides effective visual cover, and makes the vehicle immune to critical damage. Active Protection will defeat all incoming anti-tank or high-explosive projectiles for a short time while active (with the exception of TV Missiles which are classified as a 'vehicle' instead of a 'weapon/projectile' by the game engine).

The gunner is always armed with a secondary heavy machine gun turret, and can equip one specialization. The Gunner SOFLAM can be equipped to laser-paint targets, Belt Feeder to improve the MG's reload time, Proximity Scan to scan for enemies around the vehicle (pointless for use in Hardcore game modes due to lack of a minimap), or Gunner Incendiary to damage enemy infantry in vicinity. In addition, aforementioned optics may be equipped.

Other passengers may fire light machine guns with unlimited ammo through the firing ports and still be completely protected. 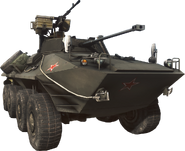