"In the event of a Chinese military coup, the Russians would be loyal to Admiral Chang."

Baku is the first mission featured in the Battlefield 4 campaign. The mission was featured in the "Fishing in Baku" Reveal Trailer. It involves Tombstone Squad escaping with intel on Admiral Chang Wei's political relations with the Russians twelve days prior to the outbreak of the war.

The mission begins in a screen of black with music playing. It is revealed that a radio is playing the music—the radio of a submerged car. Four military personnel are shown in the car; Daniel "Reck" Recker, Clayton "Pac" Pakowski, Kimble "Irish" Graves, and an amputated William Dunn. Recker had just woken up from unconsciousness next to Irish. Dunn shortly began talking to Recker, complimenting his driving right until "the end". He ordered Pac to turn on a light, revealing they were still sinking in the water. Irish attempted to move the seat, saying it was stuck and Dunn was pinned. Dunn tried to reassure him, saying the "worst thing they can do... is panic". Irish protested, saying that scared him. He told Pac to help him with his seat to free Dunn.

Pac repeated that they were still sinking, with Irish swearing and optimistically telling Dunn they'd get him out. Pac realistically asked how saying the doors were stuck shut because of the pressure. The front of the car shifted, spooking Irish. Dunn then told him this was not "how it was supposed to happen." He gave Recker his gun, quoting that "for the wolf to survive, it's gotta chew off its own leg," with Irish demanding in disbelief what he meant. Dunn told Recker to shoot the glass, Irish persistently ordering for him not to. The player has the choice of shooting the window or not. Regardless, the scene cuts to black.

The mission rewinds to thirteen minutes earlier. Recker is shutting a door whilst heavily breathing. He checks his rifle, which is out of bullets and with none to spare. He sees Russian soldiers peeking through the windows, presumably in search of himself and the others of Tombstone. He makes his way through the building. Briefly after witnessing two searching soldiers, he opens a door. As birds fly out, he enters. Pac grabs him, ordering Recker to drop his gun. Realizing it's Recker, he lowers his pistol. Shortly after, Dunn arrives, startling the two. Dunn and Pac have a short exchange regarding the intel. Pac confirms he still has it. Dunn asks about Irish, to which Pac states his belief that he was with Dunn. Dunn then attempts to contact Irish via radio.

Irish immediately replies that he is being pursued and coming from the north. Whilst Recker recovers ammo from an ammunition crate, Pac and Dunn tear down the boards covering the windows. After a couple of moments of anticipation, Irish appears smashing through a window grappling with two dogs. As he takes cover behind a truck, two Russian operators arrive in close pursuit. Recker dispatches them, along with four others briefly after. Irish climbs up to the window, helped in by Pac. They continue through several corridors, eventually ambushing a roving patrol. The gunfire attracts reinforcements, igniting a firefight. Tombstone survives and continues on. The team moves into a dead-end wall after dropping through a hole that had collapsed in the floor. The player has two options to destroy it with either an M320 grenade launcher or C4 Explosives.

To the Extraction Point[]

They traverse under a highway. As a train passes overhead, Dunn gives a SITREP to Fortress. As Recker is about to step into the valley towards the extraction point, Dunn gives him a Tactical Visor. He spots three trucks passing by. The third stops and drops its soldiers off who proceed to patrol the area. The way the player deals with these are to their discretion. Firebird 2-1, Tombstone's extraction helicopter, passes over. This takes the attraction of several soldiers. They pass over a ridge, discovering Tombstone. They engage each other. Hawkins, the Firebird 2-1 pilot, assists Tombstone with air support from her M134 Dillon machine guns. However, the engagement takes notice of the remaining soldiers ahead. Firebird continues giving support to Recker's discretion. More reinforcements arrive, but are still defeated by Tombstone. They continue through a drain pipe. On the other side, Hawkins comes under fire from RPGs. Just as Recker comes out of the drainpipe, one of the RPGs hits right next to him. Tombstone eliminates the soldiers defending the factory after an intense fight.

They press on through the factory. As they take an elevator, a Mi-28 Havoc attacks them. They sprint to the roof of the building, desperately trying to evade the helicopter's fire. Hawkins had already landed and waiting for Tombstone. As Recker is just about to get into the chopper, the Russian attack helicopter makes another strafe and lands shots right in front of him. As he falls onto his back, Hawkins loses control of her helicopter. One of the factory smokestacks also becomes unstable as a result of the strike. It falls on to the roof, smashing it in and causes Recker to slide in. As he falls, he shoots down two Russian soldiers. He passes Dunn along the way. Luckily, he grasps the edge of the building just as he falls off the side. Seconds after, Dunn falls as well, but Recker catches him.

Hawkins passes over and crashes to the ground. The wall that Recker is holding collapses and he consequently hits the ground, blacking out. He awakes to Irish digging him up. After Recker reorients and brushes himself off, he sees Pac trying to dress Dunn's wound; said wound being his leg stuck under a piece of rubble. Irish yells at him about the fuel igniting. Then, a civilian arrives with a vehicle offering help to Tombstone. Irish tells him off, saying it is too dangerous. Dunn calls Recker over, ordering him to amputate his leg. Recker reluctantly complies. As Pac and Irish take Dunn to the truck, Recker drops his knife in shock. Recker also gets into the truck, driving away from the crash.

Recker drives the vehicle towards the USS Valkyrie, still pursued by the Russian helicopter. After making it to an oil field, the chopper lines up and fires rockets at Tombstone. Fortunately, Recker dodges the volley. As it passes over, Irish gives Recker an M320 to shoot it. Recker finally destroys it, but it crashes in front of them. He veers to avoid it, but crashes in the water. Thus, creating the intro scenario. However, it skips this and instead shows the remaining members of Tombstone swimming to the surface. A conversation can be heard between Captain Garrison and the "Oracle" regarding the intelligence recovered by Tombstone that reveals Russia's backing to Admiral Chang Wei.

Concept art of Irish and Pac in Baku 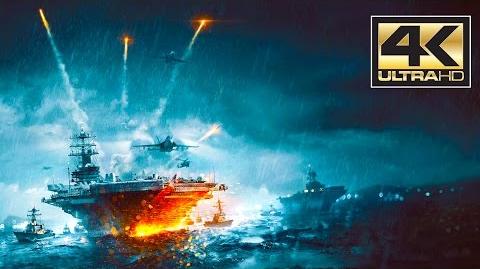