Battle of the Selle is a Codex Entry featured in Battlefield 1, introduced in the July 2017 update. It is unlocked by winning one game on Giant's Shadow.

The Battle of The SelleEdit 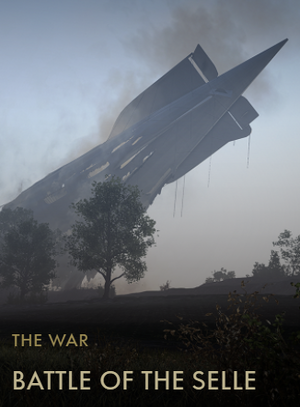 The final period of WW1 is known as The Hundred Days Offensive, beginning with the Battle of Amiens on 8 August 1918 and leading up to the November 11 armistice. It consisted of a series of Allied advances during which the German army was gradually pushed out of France. The Germans defended stubbornly all throughout the Hundred Days Offensive, with high casualties on both sides, proving it was certainly not a spent force. The Battle of Amiens forced the Germans back to their heavily fortified Hindenburg line, from where they had launched the massive Kaiserschlacht offensive in the beginning of 1918. In late September, Allied supreme commander Ferdinand Foch ordered another "Grand Offensive" to keep up the momentum and break through the Hindenburn line, which was achieved by the French and Americans in the Meuse-Argonne and by the British in the Second Battle of Cambrai. The German army began a controlled retreat and hastily took up a new defensive line along the river Selle. The war had again turned "semi-mobile" on the western front and was now being fought in the open country beyond the trenches and old battlefields. On October 17, the British launched a new attach with the intent of crossing the Selle and getting with artillery range of the railway center at Aulnoye - a vital German supply line. At 5.20 am the assault began and with a rolling barrage followed by infantry and 48 tanks. The British attacked where the river was quite narrow, so the soldiers could cross it on planks under the fortunate cover of fog. The Germans defended fiercely, and the fighting was particularly hard along the Le Cateau-Wassigny railway. However, by the end of the day the British forces had advanced over 3 km and the Germans had to fall back again. The Battle of the Selle ended on October 26, and the following day the German Quartermaster general Erich Ludendorff resigned under pressure from the Kaiser. The speed of the Allied advance increased and on November 11, the final day of WW1, the British Expeditionary Forcer liberated the Belgian city of Mons, where it had fought its first major action of The Great War four years earlier.

Retrieved from "https://battlefield.fandom.com/wiki/Battle_of_the_Selle_(Codex_Entry)?oldid=343344"
Community content is available under CC-BY-SA unless otherwise noted.