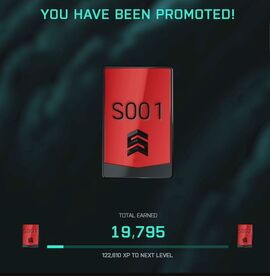 The multiplayer of Battlefield 2042 features a total of 1098 levels. Following the first 99 levels, players will enter S-levels. S-levels are denoted by an S in front of the level and range from S001 to S999.

Experience (XP) towards levels is obtained from obtaining kills, completing objectives, unlocking Ribbons, or performing other gameplay actions. Experience may also be obtained in the Battlefield Portal or in Solo matches against Bots, though both of those modes feature a cap on experience to prevent farming.