Battlefield 2142 (also known as BF2142) is the fifth installment in the Battlefield Series and was developed by DICE and published by Electronic Arts.

Official servers were shut down on June 30, 2014 during the mass GameSpy server closure by Glu Mobile that occurred that day. The game can still be played online through the Gameranger service and the community run Reclamation project.

"In 2106, the world froze. After a hundred years of debate and dissension, the world’s governments were forced to face the reality of global warming—the next Ice Age had arrived.

As snow and storms swept down from the north, living space and resources were swallowed by the encroaching ice and a frantic battle for survival began across the globe. Small-scale conflicts bloomed into major confrontations, as desperate nations united to form new superpowers—the European-led EU forces and Russo-Asian PAC army. With the formation of these coalitions came the consolidation of brains and resources needed to develop deadly new battlefront technologies: the Titans, vast dreadnoughts with the colossal destructive power to dominate the skies, and lethal, armored battle walkers, designed to outpace and outgun infantry.

Now, in the year 2142, these advances have forever changed the face of war—but its purpose remains the same: absolute destruction of the enemy."

Battlefield 2142 is set in an "ice age" period of the Earth in the 22nd century (near the midpoint of that time period), where the PAC (Pan-Asian Coalition) and EU (European Union) forces fight for the remaining pieces of habitable land in North Africa and the Middle East that the ice age has not devoured in a conflict known as The Cold War. The game features a new game mode, Titan, and is the first game in the Battlefield series not to have the United States as a playable faction.

Similar to other installments of the series, 2142 features a classed-based system, with a total of four distinct classes.

Battlefield 2142 originally featured a total of ten maps in the base game but later patches eventually increased this to seventeen. Maps take place in notable areas around the world that have been drastically changed by the new ice age, with some maps returning from past installments. The base game features three gametypes with a new gametype, Titan, introduced.

Additionally, squad leaders can equip themselves with an SD-8 Accipiter sentry drone.

Weapons and gadgets are unlocked through online progression, but can also be unlocked for offline testing/causal playing using modifications.

Battlefield 2142: Northern Strike takes place in Central and Northern Europe 6 years after the war began in 2139. It features 10 unlocks, 3 new maps, 2 new vehicles, and a new game mode titled Assault Lines. It was released on March 8, 2007 and was later made free with the introduction of the 1.51 patch.

Battlefield 2142 was rumored to be in development ever since a 30-second video was leaked to the Internet in January 2006. The video described itself as an "internal test." The proof of concept depicts the game's various vehicles storming through a futuristic city. A screenshot depicting the walker was taken from this video and subsequently used in marketing for the game.

The only proof of existence was the cover story of the PC Gamer magazine and the trailer, published on the very same magazine, until March 21, 2006, when EA/DICE announced that, the next game in the Battlefield Series would be Battlefield 2142, in their March 21, 2006 Community Update.[1]

Several pieces of early concept art were also released onto the internet. However, during a hacking attack on the board where the images were posted, most of the images were lost. Early in the development process, the game was set on a different planet, as hinted by three moons in the sky in one piece of concept art. Additionally, it was to be the United States, rather than the European Union, versus the Pan-Asian Coalition, and several files within the game indicate the U.S. (most notably the texture files used by the EU and PAC, with the EU folder being labeled 'US' rather than 'EU').

Midnight Sun, a map featured in the Battlefield 2: Armored Fury booster pack, featured the Muscle Car with license plate number 2142. Additionally in Armored Fury, there was a billboard advertising a digital wrist watch, which displays '21:42' as the time, and a Mushroom cloud with the caption message, "Watch For The Future." Additionally in Armored Fury, the drivable semi-truck had a magazine on the passenger seat that reads "Ice Age Approaches."

Battlefield 2142 was officially announced and playable at E3 2006.

The Battlefield 2142 closed beta was released in the third week of August 2006. It was only available to those who were Fileplanet subscribers as well as those who had obtained beta keys from Fileplanet. The beta ended on September 12, 2006. It was noted by many users that at the beginning of the beta the game worked great, but by the end it was horribly broken, with players getting stuck in walls and titans disappearing into thin air. It was decided to ship it anyway.

EA released an online-only standalone demo of the retail game, featuring the Sidi Power Plant on either Conquest or Titan. Demo versions were limited to demo-only servers, of which a few were initially run by EA, but were quickly supplanted by player run servers.

Ranked points or unlocks could not be earned in the demo, though several demo servers ran their own ranking system. The demo was not updated in parallel with the complete game, and so several exploitable glitches and bugs existed, though most were patched or policed by the demo modding community and server admins. Unlike in the full game, a modding community thrived within the demo servers, primarily because of the static frozen environment untouched by patches, and the desire and competition between server administrators, to create fresh and diverse features to add to an otherwise limited gaming environment.

EA discontinued support for the demo August 11, 2011; it is no longer possible to create a player character in the demo game client, or login with an existing demo account to an EA player database server, which essentially renders the demo game no longer functional.

Battlefield 2142 has received generally positive reviews from industry critics. The game has a score of 80 out of 100[2] on Metacritic and 79.77%[3] at GameRankings.

GameSpot gave the game a score of 8.1 out of 10,[4] saying that "Aside from the new Titan mode, there's not a lot new here, though, so this doesn't feel anywhere quite like the leap that Battlefield 2 represented from its predecessors--it's more akin to what Battlefield: Vietnam was to Battlefield 1942. Still, if you're looking for more multiplayer mayhem, it's hard not to recommend Battlefield 2142."

IGN gave the game a score of 8.4 out of 10,[5] saying that "Battlefield 2142 might not be extraordinary, but it still got excitement and fun."

CPUGamer was the least impressed reviewer for the game, giving it a score of 6.5 out of 10,[6] saying that "2142 is not a bad game – it’s got lots of bugs, balance issues, and other idiosyncrasies, but it’s not bad. My only issue with it, honestly, is that DICE hasn’t really made an effort to change anything substantial about the game in five years. I understand that they’ve created a winning formula, but I’ve grown pretty tired of playing the same thing year after year, and no change of scenery – to Vietnam, the future, or anything else – is going to alter that basic fact."

Battlefield 2142 has, and still is being criticized for its difficulty to play on Vista. The game was only tested for XP. It's very difficult to get the game to function at all on Vista, and many times, it will simply crash before the game begins. Players have also reported connection issues online with the game when using wireless networks while using Vista as an operation system. The game may also freeze and, will be unable function again until reinstalling the game. However, EA has released a patch that supposedly would address many issues with Vista. The game functions fine on Windows 7, with the exception of some occasional Punkbuster compatibility issues with Windows 7, which may result in the player being kicked for "an unknown Windows API function." 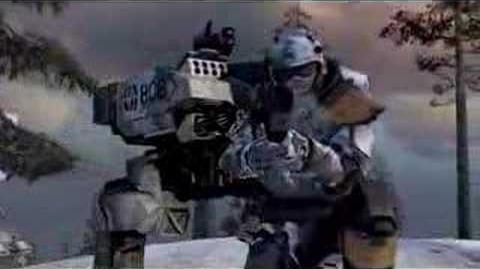 Battelfield 2142 Intro
Add a photo to this gallery

﻿
Retrieved from "https://battlefield.fandom.com/wiki/Battlefield_2142?oldid=358001"
Community content is available under CC-BY-SA unless otherwise noted.