United States of America Vs. People's Liberation and Resistance

"Join us as we follow Staff Sgt. Black and his team of U.S. Marines into the bad part of town, as they move to the rooftops to eliminate an enemy sniper in an abandoned hotel.

This in-game footage from Battlefield 3 shows off the ANT animation technology in all its glory and as the explosive finish to the Battlefield 3 Fault Line series draws near, Sgt. Black is tasked with disarming a home-made bomb, leading to first-person melee combat with the bomber and a large-scale firefight in the streets against massive opposition."

A Iraqi city can be seen.

COALITION FORCES LED BY US MARINES CONTINUE PACIFICATION OPERATIONS ALONG THE IRAQI/IRANIAN BORDER TO RESTORE STABILITY TO THE REGION.

MARINE FORCES HAVE BEEN ENGAGING A RISING HOSTILE INSURGENCY CROSSING FROM IRAN INTO IRAQ NEAR SULAYMANIYAH.

ATTACKS SHOW SIGN OF ORGANIZATION. THE INSURGENCY IS KNOWN AS THE PLR.

Montes: Hey what the fuck are we stopping for?

Player is shown to be inside of a LAV-25.

Player's squad gets out of the LAV-25.

Montes: The objective is 20 klicks north!

City noises can be heard.

Player gets out of the LAV-25.

Montes: I guess we're late to the party.

A AH-6 Little Bird flies by.

A Marine can be seen leading an arrested insurgent away.

Dave: You ever ask yourself why this part of the world gets so fucked up all the time?

Player continues following his squad into a marketplace. Two more Marines are seen leading a captured PLR member away.

Screen flashes forward, the squad is now gathered around a table with the Marine Lieutenant.

Marine Lieutenant: Look, the situation is this.

Marine Lieutenant: We've lost contact with Jackson's squad, they were investigating a lead on a possible chem weapons site at grid eight zero. For now you're the only element I've got to send.

Marine Lieutenant: Jackson's last known position was Spinsza Meat Market, and they're at a bad fu- *A helicopter flies by, censoring the lieutenant.* part of town.

Marine Lieutenant: I need you to find our Marines, and bring them back ASAP before the PLR find them. Move out.

Screen flashes forward, the squad is now breaching a door, and heads into a alleyway.

Screen flashes forward, the squad is headed towards a building.

The squad breaches a door, and heads into a alleyway.

A dog appears and barks at the squad, but it is behind a iron fence and soon runs off.

The squad breaches another door into a school.

Radio: Make sure you have positive ID before you engage.

Screen flashes forward. The squad is now inside the school.

Squad breaches a door into the school.

Radio: Make sure you have positive ID before you engage.

Marine: ID a target. What is this? A school?

Marine: Oh that's right I keep forgetting they don't have schools where you come from.

Marine: Stay together, check your corners.

Squad heads further into the school.

A small tremor occurs, shaking up the school.

Marine: Someone needs to tell the EOD (Explosive Ordnance Disposal) to blow those ammo dumps further away.

Marine: That's a quake tremor boys. We're like 90 klicks away from a major fault line.

Screen flashes forward. The squad is now on a street and soon head into another building.

Marine: Stay quiet, something's coming, get back, wait for them to pass.

Squad goes silent and gets close to the walls.

A PLR Technical drives by.

Marine: Cross the twins, Black, you and Matkovic take the door on the right.

The squad is now crossing the street, Matkovic and black head into the building.

Marine: Not a single civi. I don't like this shit.

Player heads out of the building into a parking lot.

A Marine gets shot and falls to the ground.

Another Marine jumps down from a fence.

Player grabs the wounded Marine and starts dragging him towards the building.

Marine: Where the fuck is he?

Screen flashes forwards before the player finishes dragging the wounded Marine away.

The squad gives covering fire while the player drags the Marine into the building and lays him down.

The Player starts engaging PLR Insurgents with his M4A1.

Screen flashes forward, the squad has eliminated all of the PLR Insurgents.

Marine: Give me a SITREP!

Player takes cover behind a van.

Sound of a RPG cuts off the Marine and hits the van the Player was taking cover behind. Blowing him backwards.

*End of Episode I: Bad Part of Town*

The Player gets back up and takes cover behind a car.

Marine: *unknown* Everybody light that building the fuck up!

Marine: Black! On me!

Marine: Tangos by the building coming into the parking lot! Their flanking!

Player continues to engage the PLR Insurgents, then heads to another car for cover.

Marine: Take that motherfucker out!

Player throws a M67 Frag Grenade at the RPG position, eliminating it.

Marine: Get the hell inside, now!

THE SQUAD MOVES TO THE ROOFTOPS TO ELIMINATE THE SNIPER

The squad breaches a door on the roof.

The sniper's shot destroys a flowerpot.

Marine : Anyone got eye's on?

Marine: I can't see him.

The Marines run to a different cover.

The sniper then takes another shot .

Marine: Let's go, cover to cover, we'll draw him out.

The squad heads to a air conditioning unit and uses it as cover.

The sniper takes a third shot.

The sniper fires a fourth shot.

Marine: Get on the fucking deck.

Marine: Get down to the edge.

Marine: And we stick his head out and then we fucking shoot him.

Marine: Black! Wait for us in position.

Marine: Talk to me, you got eyes on?

The Marines prone down and start crawling

Marine: I got it.

Marine: There's the sniper, okay, okay, across the street, 50 meters midway up, he's dug into a spider hole.

Marine: I got AT.

Marine: Give it up to Black.

Marine: You're the best shot!

Marine: I'll cover you and you hit him.

The Marines start firing at the hotel and Black fires the AT-4 and it collapses the entire facade of the hotel.

SUSPECTING AN IED, SGT. BLACK IS TAKED TO FOLLOW IT...

The Player follows the wire deep into the basement

Marine: *on radio* Did you get that, Black? Follow the god damn wire!

The Player follows the wire until it goes through a locked door, Noticing that both doors are locked.

The Player goes into the ducts.

Marine: *On radio* You okay in there? It's just another god damn tremor. Nothing to worry about, we got one-four-zero to reinforce, just get to that wire cut!

The Player continues crawling through the ducts until he gets out, on to a room. The Player spots the wire again, leading into an IED.

The Player pulls out one of the IED's wires. As it was the wrong one, the IED starts beeping. The Player looks up, a shadow can be seen behind the Player, as an insurgent appears to defend the IED.

The Player starts a sequence of fist-fighting between the insurgent, the player wins the fight, knocking out the insurgent, and the Player is able to cut the red wire just before the IED explodes.

Shots are heard outside, the Player starts exitting the basement.

AH-6 Littlebird can be heard on the radio, following by the AH-6 firing it's guns upon the PLR Insurgents.

Black starts engaging a Insurgent on the bridge, then engages another one under the bridge.

Marine: Black! Get up on the wall, and man the LMG!

Black walks onto the bridge and takes an M240 Light Machine Gun with EOTECH from a fallen Marine.

Marine: Alright, they're coming down the street. *Inaudible*

Marine: Jesus Christ!, look at all of them.

Marine: We're down a man!

The player prones, lowers down his bipod, and resumes firing.

The player reloads his M240 and walks to the right of the bridge and starts engaging more PLR Insurgents.

*Episode III: Get that Wire Cut only*

Player continues engaging the oncoming PLR Insurgents, then walks back.

Sound of a minigun firing can be heard.

Player looks up to see a AH-6 Little Bird firing at the PLR forces, as shell casings drop on him.

The player runs down from the bridge.

Marine: Aw fuck! They're trying to flank us!

Marine: There! That enemy vehicle wreck!

Marine: Black! Get up on that weapon! We need suppressive fire!

Misfit Actual: Misfit 1-3 this is Misfit Actual. Hang tight, chopper's circling back for you.

Player engages the PLR Insurgents with the PKM as the AH-6 fires it's miniguns at the insurgents. The ground starts shaking violently.

The ground starts to crack, shaking the Technical and causing the Player to fall off.

Two buildings can be seen collasping, one of them towards the player.

Marine: It's going fucking down!

Blackburn raises his hand to shield his face.

Radio: All units on this net be advised, a catastrophic earthquake event in Iran is affecting all operational capability in the Iraq-Iran region.

The screen shows heavy fighting in a unnamed city at night, with rocket artillery, and anti-aircraft fire.

Screen flashes to three U.S Marines jumping off a cliff, with a pair of AH-6 Littlebirds pasing over them.

Screen flashes to a early jet gameplay, with a Su-37 Flanker-F flying past a F-16 Fighting Falcon, only to be destroyed 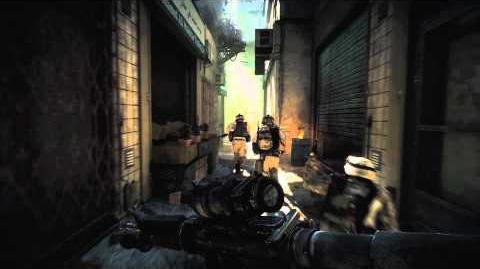 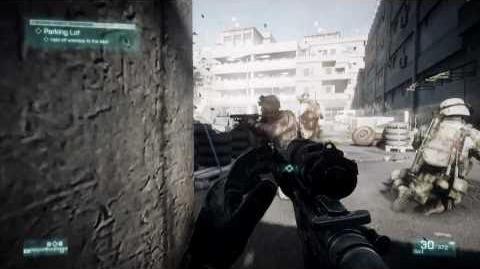 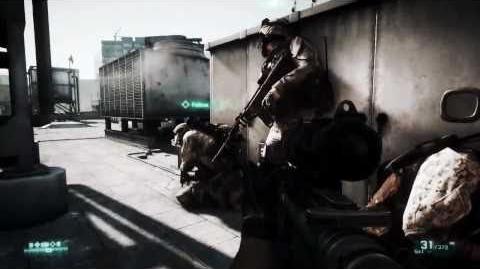 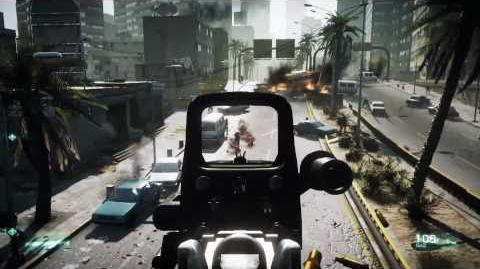 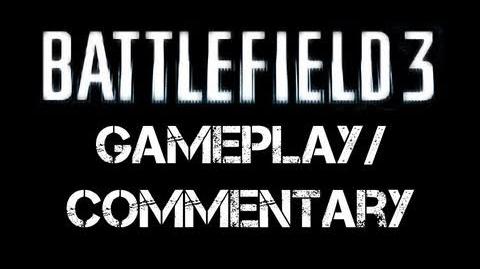 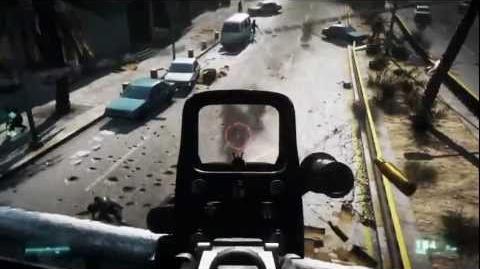 Battlefield Wiki
The trailer with the song The Theater, The Dream, The Battlefield by Remo Baldi
Add a photo to this gallery
Retrieved from "https://battlefield.fandom.com/wiki/Battlefield_3:_Fault_Line?oldid=286395"
Community content is available under CC-BY-SA unless otherwise noted.