Appearance is a customization feature in the Battlefield Series that allows users to change the default look of a vehicle, weapon or soldiers camouflage.

Soldier camouflages are unlocked through leveling up, completing assignments, or being a Premium member. These can be equipped by highlighting your kit and pressing Appearance option on PC (next to Customize), Triangle on PlayStation 3, or Y on Xbox 360. The different camouflage types have an effect on both visibility, and some effect on the player's perception through the IRNV scope.

Camouflage returns in Battlefield 4 with a much wider variety of patterns available for battle dress, weapon and vehicle paints.

Camouflages for weapons and vehicles are organized into eight groups of palettes:

These patterns are available with all palettes aside from Miscellaneous.

Various camouflage patterns are available to each faction:

Russia deals exclusively in Jungle and Forest patterns, with plenty of dark green throughout. The closest thing they come to another environment is the premium-exclusive Yeger which has soem transitional coloring

China's patterns have a heavy urban and maritime influence, and apart from the desert pattern feature lots of greys and blues.

Players can create emblems in Battlelog by using a series of predetermined icons and symbols, applying various colors and opacities, and arranging them in layers. This resembles the system available for BF3 Platoons in Battlelog.

By default, players can choose 20 symbols from an initial pool of 80. An additional 70 symbols can be unlocked from Battlepacks. Premium players can use 20 exclusive symbols, and gain 20 more layers.

A limited selection of vehicle camouflages were available during the E3 2013 alpha.

The Z-10W with hexagonal camouflage seen in the Only in Battlefield 4: "Crash In Guns Blazing" Trailer. 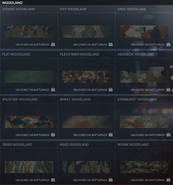 Retrieved from "https://battlefield.fandom.com/wiki/Battlefield_3_Customization?oldid=243561"
Community content is available under CC-BY-SA unless otherwise noted.