Microsoft Windows
"The war is over! You have fought long and hard but the time for peace awaits us. The Nationals and Royals have finally been able to put the past behind and call a truce. With peace comes an end to a great story, and thus it is with a heavy heart that we must inform you, that on Tuesday July 14th 2015 we will be closing Battlefield Heroes for good and stopping the service in its entirety."

Battlefield Heroes (also known as BFH) is the seventh installment in the Battlefield Series and was developed by both DICE and Easy Studios. It is the first game to be released in EA's new "Play4Free" service, though players can spend money to buy weapons and customizations. It was developed to run on all kinds of computers so players with sub-par computers are able to enjoy the game.

It was announced that no new accounts would be able to be created for the game after April 15, 2015[1], and all servers were shutdown on July 14, 2015.[2] The game can currently be played online through the community run Phoenix Network and Rising Hub

The game takes place during the Royal-National Army Conflict. A parody of World War II, it revolves around the Royal and National Armies, both of which are based on British, American, and Nazi Germany soldiers respectively.

The game's two factions, the Royals and Nationals, were once great friends. During the Olympics, however, the Royal Nation accused the National Homeland of cheating during a track cycling contest. Controversy arose and the Nationals made fun of the Royal King's mustache, leading in the Royals to declare war against the Nationals.

Following the announcement of the game's shutdown, it was revealed that the Nationals and Royals were finally been able to put the past behind and call a truce, explaining its imminent closure.

Battlefield Heroes keeps the core gameplay of the Battlefield Series while also introducing its own unique additions to the series. To combat unfair games, Battlefield Heroes uses a matchmaking service to match players of similar skill level to prevent unbalanced matches. Unlike previous installments, the game is in third-person view.

As the title suggests, players are able to create their own "hero" upon starting the game, including what faction and class they belong to. All heroes are given a default set of items including their hero's appearance and their weapons, gadgets, and special abilities. Due to the free-to-play nature of the game, higher quality items are rented for a limited amount of time with the in-game currency, Play4Free Funds. These are obtained by purchasing them with real-world money. Items may be obtained permanently by spending a larger sum of Play4Free funds. 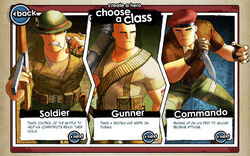 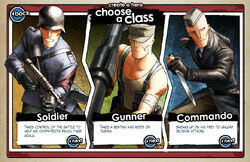 Over one hundred weapons are available in Battlefield Heroes. Each weapon is exclusive to a specific class. Default weapons are based on well known weaponry from World War II. Weapons that were introduced after the initial release are based on the themes of the various updates and bundles that introduced them. Weapons may be modified and upgraded through the Workbench. The amount of upgrade slots is different for each weapon.

As with other installments, Battlefield Heroes features various vehicles scattered around each map. Aside from emplacements and naval craft, all vehicles are faction specific and have slight differences from one another. Each faction has access to four vehicles: jeeps, medium tanks, fighter planes, and helicopters.

Battlefield Heroes features a total of thirteen maps and four gamemodes. Many of these were introduced through later updates and special events. Maps are categorized as either infantry or vehicle focused. Each factions has an initial spawn point on opposite sides of a map.

On May 6, 2008 the first phase of the game release was an invitation-only closed beta and the invitations were given to professional beta testers only. Following the selection of beta testers, the amount of traffic caused the site to crash for a short time. Once the website was placed back up it was revealed that third-party professional testers would be testing the game, and several open beta phases would begin in the near future. The purpose of these beta phases is to test server capacity as players download the game and whether the servers provided can handle the intense use. The current closed beta players are under a non disclosure agreement, disallowing them from releasing information about the beta. On August 29, 2008, hundreds of beta keys were given out at the EA booth at the Penny Arcade Expo on small cards to anyone in attendance. The closed beta ended on November 14, 2008.

DICE stated in a post, that they would be handing out extra closed-beta keys for the first 20 comments on their new posts. This was posted on the official Battlefield Heroes website on July 31, 2008. It was revealed that the first of these posts would be made on August 4, 2008. This caused so many users to be on the Battlefield Heroes website at the same time waiting for a beta key, that it caused the Battlefield Heroes server to crash, delaying the release of the keys until maintenance could be completed. Two days later on August 6, the method was changed so that users had to solve a riddle to win a beta key (although the first 20 comments were still awarded beta keys on this occasion, since it was not made clear that the format had changed).

On August 9, the second beta-key riddle was released (being harder, this riddle was available for a longer 5 minutes). Users were told that the riddle would be released at 7 pm, however, there was a degree of confusion over which time-zone was meant (being based in Sweden, DICE used the GMT +1 hour time zone, which was clarified later with the third riddle). On August 27, 2008, DICE released another set of keys, this time 400 were given out. Another 200 were released on September 11, 2008; these were used up in 22 minutes.

On February 16, 2009, 2000 beta keys were given out to some of the fans who had signed up for the previous stage on QABoss, and an additional 2000 the next day. On February 24, it was announced that the QABoss beta keys were all handed out and have moved on to those who signed up on the site. Some fans seem to be having problems: there are still those who have signed up on QABoss and did not receive a key. DICE said that either they signed up too late or it was just a simple mistake. On April 2, 2009, DICE sent out 50,000 new beta keys to people who registered for the beta. On June 25, 2009, Battlefield Heroes was moved to open beta allowing anyone who missed out on a beta key to play the game. Anyone can register and play Battlefield Heroes, without any form of beta key from the Open beta, to today's release.

On June 26, 2011, hacker group LulzSec announced that they were able to hack into Battlefield Heroes and steal screen names and MD5-hashed passwords of over 550,000 beta users. According to staff, no emails, account history, credit card numbers or payment methods were compromised; only screen names and encrypted passwords were taken by the hackers. As a result of this security breach, Battlefield Heroes was taken offline pending further investigation. Play services were resumed and Battlefield Heroes website went back online after being down for one day after the breach. The investigation into the security breach has ended. All accounts were restored and were set to get their passwords changed for security reasons.

Battlefield Heroes currently holds a score of 69[3] in Metacritic based on 24 reviews and a score of 73.13%[4] in GameRankings based on 15 reviews.

Players who obtained a physical box copy of Battlefield Heroes were able to redeem a viable code on the back, earning the player several in-game items. These items include 8,000