watch 03:19
Wiki Targeted (Games)
Do you like this video?
Play Sound

PC
"A new kind of wicked evil has come... which has transformed humans and puppets to something unexpected...... On 22th of October, Halloween has started. Grimaldi and Mr.Rag have gone wild especially for this event. While it's told that Grimaldi was so funny that people died from laughter, Mr.Rag went alive due to love he was receiving, but went evil because no attention was brought to him when Grimaldi came... both are now ready to end their foe's lives. Which army will you join?" 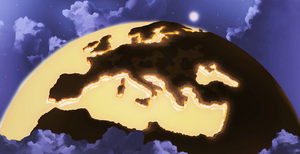 A notable change is that the War Room received a new Halloween redesign.

The old Halloween outfits returns from The Vault before halloween to scare people before the haunting starts... each other day, a new set is released from The Vault, to scare everybody. Older weapons return to cause mayhem.

Retrieved from "https://battlefield.fandom.com/wiki/Battlefield_Heroes:_Halloween_2013?oldid=369402"
Community content is available under CC-BY-SA unless otherwise noted.