Battlefield Mobile is an upcoming installment in the Battlefield series set to release before April 2022.[1] Developed from the ground up by Industrial Toys in association with DICE, it will be available for Android and iOS platforms. [2]

Battlefield Mobile more faithfully replicates Battlefield gameplay on mobile devices compared to the Deathmatch-like multiplayer seen in Battlefield 3: Aftershock and BC2 iOS, featuring combined arms gameplay on larger maps. Gameplay is heavily based off of Battlefield 3 and Battlefield 4, with a focus on infantry and ground vehicle gameplay in destructible environments. Soldiers have regenerating health, and can sprint, crouch, prone, and mantle over objects. Spotting functions similarly to Battlefield: Bad Company, requiring players to zoom in on an enemy for a short period of time to Spot them.

Mobile uses the four kit system seen in Battlefield V. Kits are not restricted to a specific weapon type, only gadgets are locked to individual kits. Weapons, equipment, and soldier specializations are unlocked from the player's overall career progression as opposed to the kit progression seen in most games.

Grand Bazaar returns from Battlefield 3, unchanged in layout but with a slightly different design. Destruction interactions seen in the original map remain, including the ability to cause environmental kills with falling debris.

Weapons dropped by killed players can be picked up by living players and will also supply a small amount of ammo for weapons of the same type. Players will passively regenerate ammunition for their equipment over time but can also resupply from the Support's Ammo Crate.

Mobile was first announced on April 22, 2021 in a news post by DICE General Manager Oskar Gabrielson on the official Battlefield website. It was stated to be a standalone experience that DICE and Industrial Toys had been prototyping for "years".[2] The unnamed game was projected for a 2022 release window. FarBridge was also revealed to be assisting in the development of Mobile in July 2021. [3]

Early play tests in Indonesia and the Philippines were announced for Autumn 2021. The play test would feature the map Grand Bazaar and the Conquest gamemode, and only be available on devices running Android 7.0 or newer.[4] The game's Google Play store page was also made public with the announcement to allow eligible players to pre-register for the play tests. The first play test was released for pre-registered users in Thailand on September 25, 2021.[5] 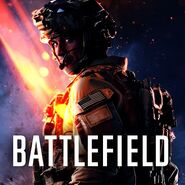