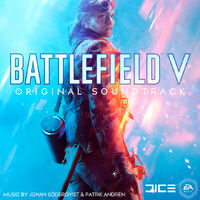 Firestorm soundtrack was released later on June 24, 2019 for SoundCloud.

Battlefield V: War in the Pacific

War in the Pacific soundtrack was released on December 3, 2019 for SoundCloud.

The Bonus Track: Pacific Rave is a remix version of original Battlefield Theme by Rasmus Thorup.[1]

Retrieved from "https://battlefield.fandom.com/wiki/Battlefield_V:_Original_Soundtrack?oldid=373071"
Community content is available under CC-BY-SA unless otherwise noted.