Battlelog is a web-based social networking service developed by ESN, later renamed Uprise, for the Battlefield and Medal of Honor series. For PC players, It replaces much of the in-game menu from prior Battlefield games as a means of launching the various game modes, expanding on statistics tracking features, and integrating forums and messaging.

Changes to audio, video, and key bindings cannot be done from Battlelog, and must be done in a game session. Players can access the singleplayer Campaign without logging into Battlelog, but must be logged into Origin. To access the other game modes, PC players must log onto both Battlelog and Origin.

Battlelog is also available for mobile devices, where most of the same stat-tracking and messaging features are still available.

Following April 2021, the Battlelog forums are no longer accessible, and redirect to the EA Answers website.

Combining elements of the Battlefield Blog and BFHQ, Battlelog was first announced at E3 2011 and was subsequently made available upon the release of the Battlefield 3 beta, albeit in a beta itself, with the final version releasing on October 25, 2011. It was later heavily updated on June 4th, 2012 to help promote Battlefield Premium. Some of the new features included access to all Premium unlocks, easier access to co-op and multiplayer stats, assignments, leaderboards, unlocks, etc.

On October 4th, 2012, Battlelog included support for Medal of Honor: Warfighter alongside Battlefield 3, sharing Battlelog functions almost identically. The website was given a visual update in May 2013 that made greater use of WebFonts and reorganized the header menu so as to make accessibility easier.

Battlefield 4 marked the release of the website's third use, labeled as Battlelog 2.0. It was integrated into the game similarly to Battlefield 3 but allows owners of consoles to utilize features that were previously PC exclusive. Many features are not available in real-time on the PS3 and Xbox 360 and the use of a minimap on an external device is not available to them entirely. Battlefield Hardline also uses Battlelog 2.0 and functions in a similar manner. The next two Battlefield-style games from DICE, Star Wars Battlefront and Battlefield 1, notably abandoned Battlelog for in-game UIs instead.

The previous layout of Battlelog.

The latest update of Battlelog, featuring a redesigned UI.

The new mobile layout, note that the navigation buttons are in the menu accessed by the top-left-hand side icon. 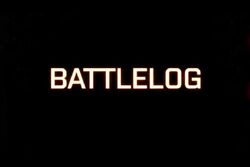 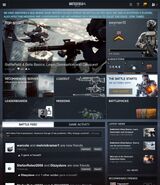 Battlelog interface during the beta for Battlefield 4.

Battlelog interface during the beta for Battlefield Hardline.

EA announced in spring 2021 that as of March that year, the Battlelog forums would become read-only, and as of April 7, they would no longer be accessible even for reading, and would simply redirect visitors to the EA Answers website. [1]