PC
"In February 2140, the PACs X and II Command Divisions swept through Serbia and trapped the EU 9th Armored Corps in the heart of Belgrade. A massive ice wall blocking its retreat, the EU force, inspired by General Emil Nikoli, staged a tenacious resistance. In March, the PACs Northern Command Group arrived through recently annexed Bulgaria. Led by a swift, V-shaped formation of T-39 Bogatyr battle walkers, the bolstered PAC forces burst through the EUs eastern flank and forced their surrender. With control of Eastern Europe, the PAC turned its sights to the EUs central command in Berlin."

Belgrade is one of the ten base game maps appearing in Battlefield 2142.

Belgrade does not feature the Titan game mode.

On Conquest Large, the PAC holds an area north of Pond, with most commander assets along the perimeter, and a Rorsch Mk-S8 railgun watching both approaches.

North control point set on a hill. A shallow pond sits in a fenced area. Two railguns are placed to the north, barely out of sight of each other.

On Conquest Small, this flag serves as the PAC deployment.

Open area connecting the main road to the PAC sector. Each of the buildings beside it have hallways open to the outside. A wall separating this area from Com Tower has been breached. A railgun emplacement has sight of the Pond area, and the turn from the main road.

West flag area set on a raised platform. Each team has an approach from the main road via a paved ramp, and a smaller staircase for infantry. The square is surrounded by three buildings with second-floor access, giving plenty of room to hide. Defense is aided by two railgun emplacements.

From here, players have a better view of the monorail passing over the main road. PAC forces can walk up an ice ramp to monorail level before it disappears within the glacier.

A large open area in the center, blocked off to vehicles. Trees and rough terrain provide cover from the road and monorail line. Each team has two access points from their respective sector, while the EU has additional entrances from Playground through buildings. Infantry can vault over the wall beside the main road, but must watch for defenders at Statue and down the road.

One of two yards in the EU sector. The five buildings enclosing the yards all have second floor access, two leading to Com Tower, and two others leading towards Monorail. A railgun emplacement is at the southwest corner, with view of the entire playground, and many of the paths to Statue, but view further south blocked by a building.

On Conquest Small, this flag serves as the EU Deployment.

South station in the EU sector. Cargo containers provide cover at ground level, with two railguns to each side. A tall ladder leads to the monorail station above, giving EU access to the elevated line once they get past the monorail car.

An elevated area at the south edge along the main road. Two smaller passageways follow beside the glacier, and to the east of a tall building near Monorail.

The layout slightly favors the EU, as they spawn closer to the Com Tower and Statue flags (central flags in CQ Large), and the row of buildings between Ruin and Com Tower are less porous than those between Com Tower and Playground/EU Deployment. There is also a much larger area open behind Pond/PAC Base where EU can set up spawn beacons and harass.

Each base provides a battlewalker and a fast attack vehicle.

Each base provides a tank, APC, and two fast attack vehicles. The APCs allow easier access to the monorail line.

The Statue flag gains a battlewalker spawn, and additional vehicle-sized entrances along the west side leading to open areas beside the glacier. Additional buildings separate the areas, connecting via hallways and passages around the buildings. 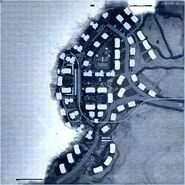