Beutepanzers is a Codex Entry featured in Battlefield 1. It is unlocked by destroying one of the captured Mark V tanks in the chapter Steel on Steel in the singleplayer mission Through Mud and Blood 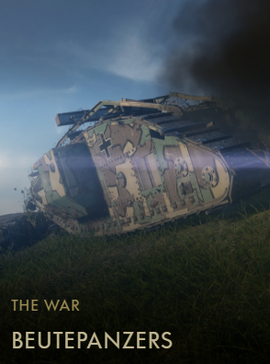 German tank detachments used captured French and British tanks in combination with advancing infantry. They were mainly used in support roles because of their small numbers, and were tasked with drawing the attention of the enemy defenses.

But without the capacity to resupply or repair them effectively in the field, once the "Beutepanzer" were knocked out or had broken down, their crews usually abandoned them. The use of the cumbersome, slow-moving tanks was never really popular with German High Command, because they contradicted the quick, aggressive tactics of the German attacks.

Retrieved from "https://battlefield.fandom.com/wiki/Beutepanzers_(Codex_Entry)?oldid=343408"
Community content is available under CC-BY-SA unless otherwise noted.