Battlefield 2042/Blog/The Journey to Season One

The Journey to Season One

The Journey to Season One[]

You’ve waited patiently to hear from us on what we’re doing to address the issues with Battlefield 2042 that you have told us about, and the direction you can expect to see us take in the months ahead. Today we are stating our team's commitment to bring the game up to the highest standards that we all hold for the franchise.

We have heard you. So, we are heavily invested and committed to the future of Battlefield 2042 – working on taking action on multiple fronts to address feedback and implement extensive fixes to the game, key features that are important to you, and getting team play where it needs to be.

We’ve had to make some big decisions to ensure that our next set of updates can be focused on delivering these improvements, with the most substantial one being to move the release date of our first Season to early Summer. This decision gives us the time to focus on improving the Battlefield 2042 experience while finalizing the development of our seasonal content to ensure that it all reaches our standard for quality.

Here’s a snapshot of the features we are bringing into the game as soon as possible:

For team play, you can expect us to incorporate a clearer, tighter squad loop, a refined ping system, and an improved reward loop for when you and your squad play the objective. Gunplay will continue to receive feedback-based improvements too.

Portal remains an integral part of the game and we will continue to expand its tools, modes, and tweak player experience gains. Finally, we have a team analysing Specialists and working on them. We’re not quite ready to talk about actions we’ll be taking, but as soon as we are, you will hear from us.

We’re committed to pushing up the quality of the game, both through our updates, and how rapidly we will respond to critical issues in the live environment. We are also going to clarify the direction we’re taking, and what’s motivating our decisions to bring improvements to the game. So expect to get more insight as we expand our existing feedback loops to involve you, our players, more directly.

Our team has identified several areas we’re targeting for improvements. This is how we will be incorporating your feedback going forward:

These conversations will be centralised, and accessible here on the Battlefield website, and summarised across our channels.

Later this month, this process will kick off with one of our key focus areas, map design. We want to outline to you our vision for how we’re going to approach and factor into our new maps enhancements to the gameplay experience, by addressing feedback on openness and lack of cover in key areas.

Big topics like map design will be loud and broadly shared, but for more nuanced areas of the game (such as Portal logic) we may have those conversations on smaller scales. The important part here is that all these conversations will happen publicly, and with everyone invited to take part.

Some of these feedback loops will cover bigger areas than others, and some loops will take longer to complete and realise in the game than others. That’s not an indication of how we might prioritise issues with the game, but a reflection on the nature of game development. Changes to our maps and core gameplay will take time.

Our commitment is to explain our reasoning behind future decisions and to make sure you understand where we stand on your feedback. We want you to see more of the big picture of where we’re going and incorporate more of what we’re already hearing to ensure that our work is meaningful to you.

We’ll start this process ahead of the launch of our next update. You’ll read about it here on our website when we start these conversations, and if you’re already following Battlefield across social media, you won’t miss it when we do.

Looking Ahead to Season One[]

When Season One arrives in early Summer, it will mark the start of a year where we’ll deliver four Seasons, four new Specialists, and new locations along with more completely new content. We know that this release is later than anticipated for many of you who purchased or upgraded to the Year 1 Pass as part of the Gold and Ultimate Editions. To acknowledge and thank you for your patience and continued support, those players will receive an exclusive bundle containing a Specialist skin, weapon and vehicle skins, a melee weapon and Player Card, all to be delivered in the next update. 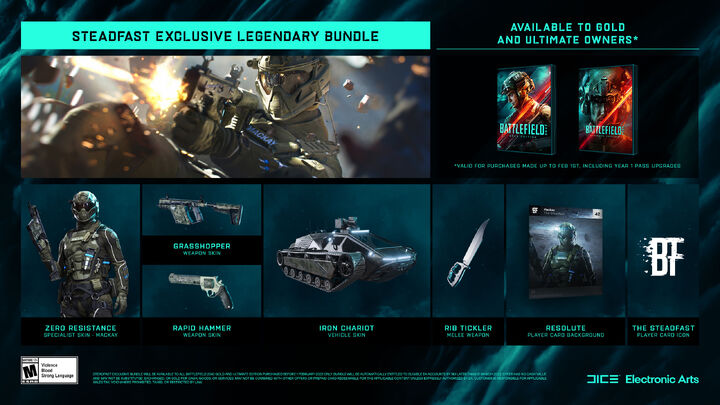 We’ll continue to keep you informed of future updates via the @BattlefieldComm Twitter account. You can also follow along with our tracking of Known Issues and game changes that we’re able to make in real time on our Battlefield forums.

We are committed to, and focused on, ensuring Battlefield 2042 lives up to our ambitions and your expectations — it’s a task we’re dedicated to accomplishing.

Ryan McArthur (Senior Producer), on behalf of the Battlefield team