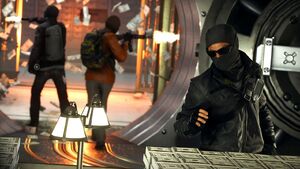 "A huge pile of loot has been intercepted in transit. The criminals are fighting to snitch the cash, while the cops are trying to secure it as evidence. Then each team has to horde the money back to their vault – but it’s not always safe there. You can also raid the enemy team’s vault to help your team score the most dough."

Blood Money is a gamemode featured in Battlefield Hardline.

Similar to Capture the Flag, players attempt to take money from a central Money Pile or, alternatively, break into the opposing team's vault and take the money located inside back to their respective vault, or in the criminal's case, the back a Bank Truck. They may also steal money from the other team's vault, provided it is filled with money.

The first team who brings in enough money to meet the money limit, or the team who has brought in the most money by the time the round ends will be the winner.

Players may collect a maximum of ten pieces of cash at once with one-hundred and fifty pieces of cash being the threshold to win the match. Those who obtain cash from money piles will receive a money filled duffle bag on their backs. Upon death, however, the cash will be dropped and available for pick up.

The rate money can picked up is based on the number of players that are participating at the same action. Money can also be gained in an alternative way, by killing enemy bag carriers. This money can then be picked up by either faction and be taken to the respective vault. Money can be identified on the minimap by small green circles.

Central Money Pile
Add a photo to this gallery

Retrieved from "https://battlefield.fandom.com/wiki/Blood_Money?oldid=372090"
Community content is available under CC-BY-SA unless otherwise noted.