Blood and Sand is a Codex Entry featured in Battlefield 1 and was added in the January 2018 update. The codex is unlocked upon completion of the Blood and Sand Operation Campaign. 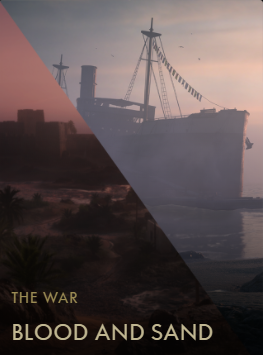 Shortly after the Ottoman Empire's entry into WW1 on 29th October 1914, the British Empire sent a fleet of British and Indian troops to the Persian Gulf to attack the Ottoman fortress of Fao and secure British oil fields and facilities in the region. After capturing Fao on November 8th, the British troops advanced rapidly along the Tigris against light Turkish resistance, and by late September they had taken the town of Kut-al-Amara, 120 miles south of Baghdad.

A new front opened in the middle eastern theatre in January 1915 when a German led Ottoman force attacked the Suez canal which was a vital supply route for troops and material for the British Empire. But the British had set up effective defenses and the attack was defeated.

Spurred on by the victories against the seemingly weak Ottoman Empire, Allied naval forces attacked the Dardanelles strait on 19th February 1915, attempting to force their way to the Ottoman capital of Constantinople. But after several Allied ships were damaged or sunk by Turkish mines and coastal guns, the Allies landed troops on the Gallipoli peninsula on 25th April to secure passage for the ships. The Ottomans defended fiercely and the Gallipoli Campaign turned into an 8-month long stalemate, with the Allies finally evacuating the peninsula in January 1916.

In Mesopotamia, the British expected to capture Baghdad without much difficulty, but instead they were defeated at the town of Ctesiphon in late November 1915 and forced to retreat to Kut. The Ottomans encircled Kut and besieged the town, and after several British attempts at relief, the British forces there finally surrendered on 29th April 1916. After Gallipoli, the British Empire was shocked at their second major defeat by the Ottomans.

The British instead reinforced their troops in Egypt and pushed the Ottomans further away from the Suez Canal into the Sinai desert throughout 1916, supported by the Arab revolt in the Hejaz. The British pushed into Gaza in early November 1917, and captured Jerusalem in December. They sent reinforcements to Mesopotamia too and resumed the advance up the Tigris, recapturing Kut in late February 1917 and taking Baghdad in March. The initiative was clearly back with the British, who kept pushing deeper into the Ottoman heartland, both in Palestine and Mesopotamia throughout 1918.

On 30th October 1918, the Ottoman Empire agreed to an armistice which ended the war in the Middle East, after four years of fighting under horrible conditions of heat, thrist and rampant disease. The Ottoman Empire was partitioned between Britian and France into borders that are still disputed to this day.

Retrieved from "https://battlefield.fandom.com/wiki/Blood_and_Sand_(Codex_Entry)?oldid=343364"
Community content is available under CC-BY-SA unless otherwise noted.