Bloody April is a Codex Entry featured in Battlefield 1. It is unlocked by keeping at least four bombers alive during the bombing run on the fortress in the chapter Total War in the singleplayer mission Friends In High Places.

Due to the relatively low health of bombers, it is advised to play this mission on lower difficulties in order to unlock it easier. 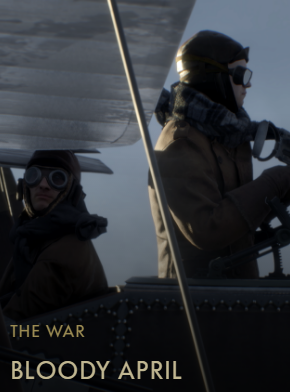 The name "Bloody April" refers to the period during 1917 where England lost a third of its fighter force, which was about 3 times that of the German Army Air Service.

SLAUGHTER IN THE SKIES[edit | edit source]

The British Army began an offensive at Arras in 1917 together with the French known as the Nivelle Offensive. It was believed that the large number of allied planes would secure air superiority during these battles. The outcome was somewhat the opposite. At this time, the German pilots were better educated and organized. The German planes, the Albatross D II and D III, also provided a superior edge in the offensives. on paper, the German Squadrons were outnumbered, but they chose when to engage and this resulted in a month of huge allied loss.

Retrieved from "https://battlefield.fandom.com/wiki/Bloody_April_(Codex_Entry)?oldid=343391"
Community content is available under CC-BY-SA unless otherwise noted.