For similar gadgets, see Repair Tool (Disambiguation)
A Blowtorch is a tool used to diffuse a flame to apply heat upon an object. It is often used for repairs to a structure or vehicle. Depending on the mixture of fuel and oxygen, the same torch can be used to weld workpieces together, or burn off metal as a cutting operation.

It is a gadget featured in many installments of the Battlefield Series, sometimes under the Repair Tool name.

Engineer
The Blowtorch is a gadget featured in Battlefield Vietnam for the Engineer kit. The blowtorch is the opposite of the Wrench, as the blowtorch inflicts damage to vehicles rather than renew its health.

400
The Blowtorch Repair Kit is a gadget featured in Battlefield 2: Modern Combat for the Engineer kit. It can be used to repair vehicles or damage enemy infantry. It differs other installments in that it requires ammo (fuel) to function. Fuel must be resupplied from an ammo crate or a new Engineer kit if depleted in a single life.

2 points per hit
"The HOFF-3000 is a high-tech Repair Tool equipped with computer analysis and a nano-torch that allows the engineer to quickly and easily repair all vehicles on the battlefield."

The Hoff-3000 Repair Tool is a gadget featured in Battlefield 2142 for the Engineer kit. It is used to repair vehicles, sentry guns, supply crates, and other gadgets. Titan perimeter cannons and air defense guns can also be repaired by targeting their respective console in the Titan's hangar area. The Titan's reactor consoles and the A3-Goliath IFV's repair cells cannot be repaired, however.

The repair tool cannot be used in any offensive manner; it will not fire when not near a valid target. An engineer sitting in an FAV's third seat (facing to rear, unprotected) can repair it while in motion. Engineers can also repair their own air transport by sitting in the fifth or seventh position and targeting the floor. While repairing commander assets or Titan gun consoles, an "overheated" repair tool continues to repair at a slower rate, though the repair animation does not play. The tool still needs to fully recover following such use.

Area-of-effect vehicle repair while in a vehicle

2 points per hit
The Dystek Repair v2.0 upgrade allows the player to repair nearby vehicles while occupying a different vehicle. Although it doesn't affect the player's own vehicle, they can park next to a teammate's vehicle to provide repairs.

3
The Blowtorch is a handgun featured in Battlefield Heroes for the Soldier. Two variants are available, the Royal Bernhardt's Blowlamp and the National Faust's Panzercutter. Both were added in the Steampunk Heroes update. Used to melt tank steel, it has a very high rate of fire and damage, but a very limited range. It can be used to hurt infantry as well, but the victim needs to stand still.

The Torch is a gadget featured in the Battlefield: Bad Company 2: Vietnam expansion for the Engineer kit. Functioning in an identical manner to the Repair Tool, it is used to repair vehicles or damage enemy vehicles and infantry. The torch also has the same stats for repairing speed and overheating speed are the same as well.

The Torch, being used by a US Army Engineer 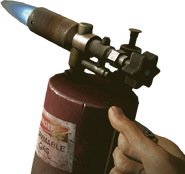 The Torch in static position.

6 per hit
"A hand held oxy-fuel welding and cutting torch provides the engineer with the ability to both Repair Friendly and Damage Enemy vehicles."

The Repair Tool is a gadget available in Battlefield 3 for the Engineer kit. It takes the form of a blowtorch. It is mainly used to repair damaged vehicles, but can also be used to sabotage enemy vehicles. While part of the player's kit, it also allows them to remove enemy explosives by holding the Reload button.

It can damage enemy vehicles and can kill enemy infantry, given enough time. Following the April 2012 server patch, the damage rate of the repair tool (and the EOD Bot's onboard tool) against vehicles was significantly increased.

As it occupies the Gadget 2 slot, it can be replaced by M15 Anti-tank Mines or the EOD Bot.

Passengers in the unarmored transports (Growler ITV or VDV Buggy), scout helicopters or air transports can repair their own vehicles in motion, and they earn points for doing so, which wasn't possible in the early stages of the game's release. Points can also be earned if repairing in the same seats while being the sole occupant of the vehicle.

3D render of the Repair Tool.

On certain maps featuring dry grass (such as Caspian Border#Battlefield 4, the repair tool can start a grass fire.

Notably, on Dragon Valley 2015, the repair tool can be used to repair destroyed wooden bridges.

The Repair Tool is a gadget featured in Battlefield Hardline for the Mechanic kit. While holding the same exact function as the Battlefield 4 variant, the Repair Tool can also be used to safely disarm enemy traps and gadgets such as Booby Traps that may be found at interaction points.

The Beta image of the Repair Tool

The Repair Tool is a gadget available in Battlefield V. Taking the form of a blowtorch, the gadget is accessible through use of the Toolbox carried by the Support, Tanker and Pilot classes, rather than occupying a gadget slot.

Three variants of the Repair Tool are featured in Battlefield 2042

"Utility welder. In the right hands it can field repair most vehicle damage."

The Repair Tool is a gadget available in Battlefield 2042 for all kits. As with past installments, it also players to repair friendly vehicles or damage enemies and their vehicles.

Used on enemy infantry, kills can be achieved with a second's worth of use.

6 per hit
The Repair Tool is a gadget available featured in the Battlefield Portal for the Engineer kit. It functions in the exact same manner as it did in Battlefield 3, capable of repairing damaged vehicles as well as damaging enemies and enemy vehicles. It does not take up a gadget slot.