The Bodeo 1889 Revolver is a Codex Entry featured in Battlefield 1. It is unlocked upon obtaining ten kills with the Bodeo 1889. 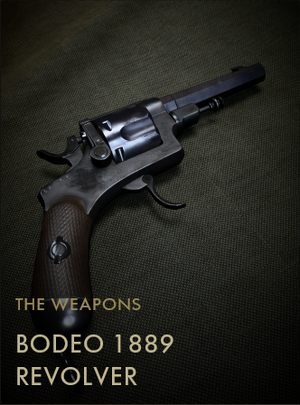 Since 1874, the French Chamelot Delvigne Revolver had been the official sidearm of the Italian Army, but the infantry found this weapon too large and heavy. Over the next decade, two different Italian gunmakers separately developed the Chamelot Delvigne into handier weapons.

In 1889 the Italian Firearm Commission combined the improvements of these two guns into the M1889 Revolver, which was adopted as the new service sidearm. The head of the commission was Italian gunsmith Carlo Bodeo, which is why the M1889 also bears his name.

The Bodeo is a double-action, 6-round black powder revolver that got the Italian nickname Coscia d'Agnello (leg of the lamb) and was produced in an Enlisted Men Variant and an Officer's Variant during World War I. The only difference between them is the design of the trigger. Although the Bodeo was reliable, simple and inexpensive to produce, it was already outdated at the time of its adoption, but still remained in service until 1945.

More modern weapons like the M1910 and M1915 pistols were produced alongside it, but never fully replaced the Bodeo. Italy produced about 200,00 Bodeo revolvers in different variants up until the end of WW1, and Spain also produced them between 1916 and 1917. The Austro-Hungarians captured large numbers of Bodeos in WW1, and the German Army used them in WW2.

Retrieved from "https://battlefield.fandom.com/wiki/Bodeo_1889_Revolver_(Codex_Entry)?oldid=343170"
Community content is available under CC-BY-SA unless otherwise noted.