Body Armor is a Codex Entry featured in Battlefield 1. It is unlocked upon obtaining three headshots. 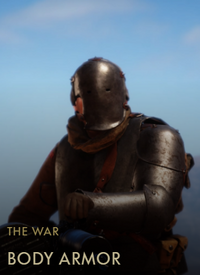 The first modern war was a war of innovation. Deadly weapons of war like the machine gun and shrapnel artillery shells demanded increased protection for soldiers in the field. The steel helmet became standard issue in armies that entered the war with soft caps. As casualty numbers increased, the development of body armor was inevitable. As modern as they were medieval, armies would field steel breastplates, rigid shoulder guards, and elaborate face masks, eager to gain any edge in survivability.

Retrieved from "https://battlefield.fandom.com/wiki/Body_Armor_(Codex_Entry)?oldid=343314"
Community content is available under CC-BY-SA unless otherwise noted.