Bolsehvik Revolution is a Codex Entry featured in Battlefield 1, introduced in the Battlefield 1: In the Name of the Tsar expansion. It is unlocked upon winning a round on Tsaritsyn. 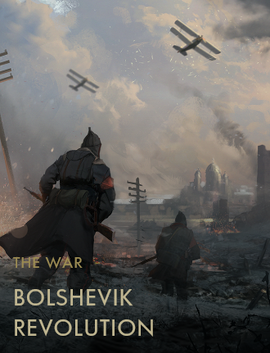 His trip funded and organized by the German High Command in April 1917, prominent anti-war socialist Vladimir Ilyich Ulyanov, known as Lenin, boarded a sealed train from his exile in Switzerland to travel to Petrograd through neutral Sweden. Petrograd was already in turmoil at this point, with starving families, tired workers, and disillusioned deserters roaming the streets. German High Command had hoped that the appearance of Lenin would destabilize the war-weary Russian society even further towards a separate peace, but the socialist agitator would eventually drive the nation into full-scale revolution and civil war. The Tsar, who had abdicated and been arrested in the February Revolution earlier in the year, had yielded his power to two rival factions, the Provisional Government and the Petrograd Soviet, but they were unable to govern effectively. Small groups of armed volunteers banded together to form the first Red Guards, who were genuine supporters of the Bolshevik cause. After ultimately seizing control in the violent October Revolution, Lenin and Leon Trotsky began organizing the Red Guards into a real military force, mostly drawn from the major industrialized cities in central and northern Russia, where the strongest supporters of the Bolshevik agenda came from. At first, this consisted of volunteers who were factory workers, former soldiers, sailors of the Baltic Fleet, men from urban garrisons, local militias, soviet unions, or loose partisan groups who would organize only for immediate military threats before disbanding. Lenin and Trotsky knew that compulsory service would be very unpopular with the peasant and agrarian societies that did not support the Bolshevik cause. In fact, the anti-socialist rural societies built the base for the counter-revolutionary army of the White Russians. The Bolshevik belief that the Industrial worker was superior to the farmer soon led to a new dimension of violence in Russian society. Over the course of the Russian Civil War, the Red Army would eventually turn to conscription, increasing its ranks to millions of men in a fight against counterrevolutionary forces, foreign interventions, and local resistance groups all over Russia.

Retrieved from "https://battlefield.fandom.com/wiki/Bolshevik_Revolution_(Codex_Entry)?oldid=343353"
Community content is available under CC-BY-SA unless otherwise noted.