Booby Traps is a Codex Entry featured in Battlefield 1. It is unlocked upon killing two enemies with Tripwire Bombs in the chapter Fall From Grace of the Friends in High Places singleplayer mission. 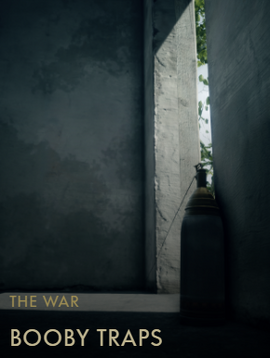 At the advent of the First World War, booby traps came in new and devious shapes. A picture hanging at an angle just begging to be straightened - with a grenade recessed in the wall behind. A dead body hiding a pull fuse attached to the belt. One soldier's account told of a piano featuring as a trigger device for a bomb.

A PIANO WITH A SECRETEdit

"When our troops entered Peronne in 1916, we entered a house and in one of the rooms was a piano, the sight of which greatly elated a young soldier, who approached it with the intention of playing it. He was warned by his officer not to do so until it had been examined. The piano was connected to a bomb which the striking of a certain note would have set off, causing the destruction of the house and everyone in it."

Retrieved from "https://battlefield.fandom.com/wiki/Booby_Traps_(Codex_Entry)?oldid=343394"
Community content is available under CC-BY-SA unless otherwise noted.