Boom Boom Boom is a Codex Entry featured in Battlefield 1. It is unlocked upon obtaining ten kills with Dynamite 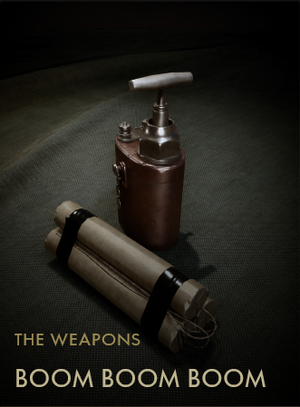 T.E Lawrence's superior officer Col. Joyce reported: "The noise of the dynamite going off was something grand and it is always satisfactory finding one is breaking things."

Some of the early grenades in World War 1 were simple wooden boards wired and loaded with dynamite. As the war progressed, dynamite and most of the equipment used for setting off explosives charges was identical to that employed by civilian miners and engineers.

Used to fill improvised jam-tin bombs, to destroy and disrupt railway lines, to shatter enemy buildings and to change the land.

Retrieved from "https://battlefield.fandom.com/wiki/Boom_Boom_Boom_(Codex_Entry)?oldid=343175"
Community content is available under CC-BY-SA unless otherwise noted.