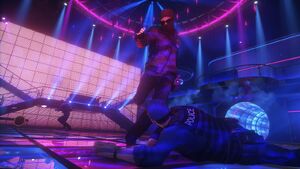 Bounty Hunter is a gamemode introduced in the Battlefield Hardline: Criminal Activity expansion.[1] A high intensity infantry focused mode, it pits two teams against one another in a race to collect each other's bounty coins.

Upon a player's death, they drop a team-colored coin that is then available for pick up by the enemy. Once picked up, the enemy team then obtains a point toward their score. Consequently, players may deny the enemy by collecting friendly coins, though they offer less points and do not reduce the enemy team's score upon collection. The first team to obtain the default threshold of 400 points is declared the victor.

While simple, the mode requires a unique team and individual strategy. It is vital that players stick together and utilize all classes to their fullest in order to prevent enemy players from obtaining coins. Coins may also be utilized to a team's advantage as they may be used to lure enemy players out and ambush them.[2] 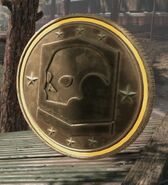 An enemy Bounty coin. Notice the red outline.
Add a photo to this gallery

Retrieved from "https://battlefield.fandom.com/wiki/Bounty_Hunter?oldid=320277"
Community content is available under CC-BY-SA unless otherwise noted.