Bourlon Wood is a Codex Entry featured in Battlefield 1. It is unlocked by not allowing the tank to get damaged before clearing the village in the chapter Steel on Steel in the singleplayer mission Through Mud and Blood.

A simple way to accomplish this is to avoid the village all together by driving Black Bess along the left border of the map and reach the windmill. Despite the criteria stating the village needs to be cleared, it will still be unlocked without killing any enemies.

THROUGH THE DEPTHS OF BOURLON WOODEdit 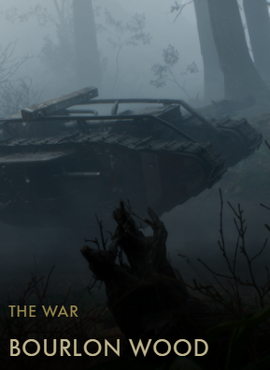 The initial German fear of the British tanks and the psychological impact they brought is known. But the Germans learned to fight them and in smaller groups they were definitely not as dominant as one might think, if you knew how to fight them.

The stories from Bourlon Wood tell of several different encounters where British Tanks were repeatedly hit and completely put out of action due to fire from German field guns and armor-piercing rounds killing crews inside. Many dramatic photographs bear witness to these events near Bourlon Wood.

Retrieved from "https://battlefield.fandom.com/wiki/Bourlon_Wood_(Codex_Entry)?oldid=343407"
Community content is available under CC-BY-SA unless otherwise noted.