Pacific coast, Southern California[1]
"Break Pointe is a driver’s paradise. Situated on a stretch of highway along the scenic California coast, this enormous daytime map features a ton of terrain to drive on, over, under, and through. In addition to the pristine roads, there are rivers, gulleys, and canyons for a little off-road exploration. Drivers can also burn rubber through dusty homes, across pristine backyards, and around (and in) a chic hotel and industrial substation."

Break Pointe is a map featured in the Battlefield Hardline: Robbery expansion. The map is set along a large stretch of highway on California's coastline, where Big Eddie's bistro is fronting for an underground drug smuggling operation.

Break Pointe is a large map with long expanses for vehicle gameplay, particularly with an emphasis on ground vehicles. While large roads along the coasts are present, off-road areas featuring rivers, gullies, and canyons are also present for exploration. Big Eddie's restaurant is centrally located in the map, and provides an area for close quarters infantry combat on the large map.[2]

As a match progresses, the evening map will turn to night - streetlamps will turn on, the sun sets, and the sky transitions from orange to blue, although the map will remain fairly bright. 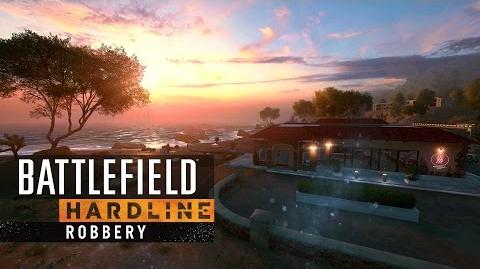 Retrieved from "https://battlefield.fandom.com/wiki/Break_Pointe?oldid=367147"
Community content is available under CC-BY-SA unless otherwise noted.