Battlefield Wiki
Register
Don't have an account?
Sign In
Advertisement
in: Stub, Construction, Gamemodes of Battlefield 1,
and 2 more

Breakthrough is a gamemode featured in Battlefield 1, Battlefield V, and Battlefield 2042. The objective of the gamemode is for the attacking team to push the frontline forward until they conquer the map while the defenders must reinforce and keep hold of it.[1]

Breakthrough is an asymmetric gamemode best described as a combination of the Conquest Assault and Rush gamemodes, combining the territory control of the former with the focused fighting of the latter. The gamemode allows for a maximum of 64 players (128 in Battlefield 2042) on even teams.

Battlefield 1 features 250 tickets for attacker battalions as standard, with 350 on Verdun Heights. Should tickets be drained the attackers lose a battalion, unless they are actively contesting a control point, in which case tickets will remain at zero with unlimited attacker spawning until the sector is won or lost. In Battlefield V, starting attacker tickets are determined by the map. In Battlefield 2042, attacker tickets were initially at 400, but were increased to 600 as standard in a later update.

Attackers can replenish 50 tickets (300 in Battlefield 2042) by securing a sector. Any remaining defenders within a captured sector are automatically spotted, and when killed grant three additional ticket per kill. Alternatively, if the defenders make a successful retreat, they will be awarded with full health and replenished ammunition. This encourages the defenders to retreat rather than dig in. Tickets can also be restored by reviving fallen allies.

Breakthrough returns in Battlefield 2042, as part of All-Out Warfare. It functions similarly to Battlefield 1 and V, and is now designed for 128 players, with 64 per team. All maps feature a set number of additional reinforcements per sector. 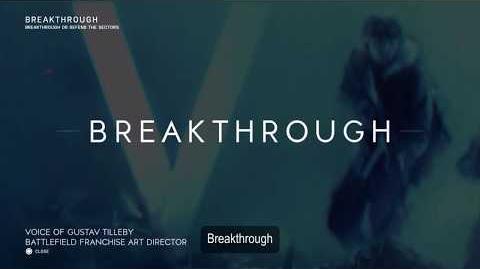