Breakthrough At Last is a Codex Entry featured in Battlefield 1. It is unlocked upon winning one game in the Operations gamemode.

BREAKING THE STALEMATE ON THE WESTERN FRONTEdit 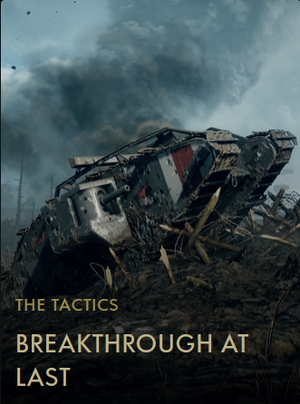 The stalemate on the Western Front was caused by the devastating power of machine guns and artillery barrages that defended the trenches. Barricades, bunkers, and wide belts of barbed wire stopped all frontal advances on the Western Front dead in their tracks. Some assaults were able to capture small trench areas or first defensive lines, but the inevitable counterattack drove the exhausted attackers out again. What was left was a war of attrition that no side could endure forever.

At Verdun and at the Somme, commanders anticipated the decisive breakthrough, the chink in the armor of their enemies that would make the war mobile again. A mobile war would free the men from the trenches and give the chance to decide the war in a final open battle. The Central Powers knew that their economies would soon collapse and readied for a decisive all-out assault in 1918, as the Russian Empire succumbed to revolution. The Allies knew by then that it was only a matter of time until their tanks and air superiority would tip the scale in their favor, and with the numerical advantage of the newly arriving American troops, they would break the enemy defenses. As it turned out, stormtroopers and tanks would both break through the enemy's defenses, but only one side was able to hang on long enough for final victory.

Retrieved from "https://battlefield.fandom.com/wiki/Breakthrough_at_Last_(Codex_Entry)?oldid=343357"
Community content is available under CC-BY-SA unless otherwise noted.