Damage drops off after 50 meters to 100 meters

The Bren LMG is a weapon featured in Battlefield 1942, introduced in the Secret Weapons of WWII expansion and issued to the British Commandos Assault. It has a 30-round magazine, decent power and range, and fair accuracy. It uses the same projectile as the M1918 BAR, and so has the same damage, but with a better rate of fire, higher accuracy, and a larger magazine, however, if fired beyond 50 meters, its damage decreases gradually to half damage around 100 meters. When the player is prone, the Bren suffers no accuracy penalty when fired, making it perfect for suppressive fire and maximal accuracy for medium-long range engagements. 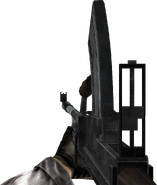 Retrieved from "https://battlefield.fandom.com/wiki/Bren_Gun/Battlefield_1942?oldid=363802"
Community content is available under CC-BY-SA unless otherwise noted.