Bringing Down Giants is a Codex Entry featured in Battlefield 1. It is unlocked upon disabling the engine of an enemy Behemoth. 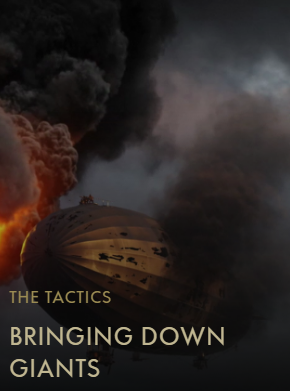 Airships that were an awe-inspiring sight of modern technology and which filled the dreams of science fiction writers and travel enthusiasts were soon turned into military symbols of fear and dominance. The hydrogen-filled giants accompanied armies and guided navies on their journeys throughout the war. Their ability to fly to immense heights, out of the reach of the early fighter planes, made them ideal for reconnaissance and even small combat missions, like the spotting and bombing of submarines or supply routes. Their scouting provided vital information about troop movement, artillery positions, and hidden reserve trenches, but new fighter planes were eventually able to bring the giants down. However, while a bullet was able to punch a hole into the hull of the separated gas bags, the rigid airships could withstand a lot of damage before they were forced to withdraw or land. To fight an airship effectively, explosive grenades from specially developed anti-air cannons had to create a barrage of shrapnel in the sky, while fighter pilots risked their lives dodging defenders to fire their incendiary ammunition and exploding rockets into the airship into a giant fireball of burning canvas and metal, crashing to the ground, with all hope gone for the crew.

Retrieved from "https://battlefield.fandom.com/wiki/Bringing_Down_Giants_(Codex_Entry)?oldid=343349"
Community content is available under CC-BY-SA unless otherwise noted.