For other uses of Bulldog, see Bulldog (disambiguation).

The SRSS (Short Rifle Stock System) Bulldog 762 Gen-4 is a bullpup battle rifle that fires the 7.62x51mm NATO cartridge. The weapon is a rifle conversion/retrofit kit that uses M14 rifle parts and places them in a bullpup stock chassis. It was developed due to the demand for a short selective fire 7.62 caliber rifle for close quarters combat without sacrificing maneuverability with a long barrel and the reduced range of a shortened barrel.

Symthic
The Bulldog is featured in the Dragon's Teeth expansion classified as an Assault rifle, and is unlocked upon completion of the Lions and Tigers and Bears assignment for the Assault class. Along with the rest of the Dragon's Teeth weapons, it was play tested early on the Community Test Environment before release.

The Bulldog is a high damaging assault rifle intended for close to medium ranged engagements. While being accurate enough for long range, its high recoil prevents it from being used efficiently. Like all other bullpup assault rifles, the Bulldog has improved hipfire accuracy and increased movement speed while aiming down the sights. The weapon deals 33 damage at point blank range, and drops off to 24 at 60 meters. This gives the Bulldog a significant advantage over most other assault rifles, allowing it to potentially kill players using weapons with higher rates of fire by putting out damage faster than they can, as well as needing fewer bullets to deal with enemies at a distance.

The Bulldog shares its damage model with the SCAR-H, but the Bulldog is geared more towards closer engagements whereas the SCAR-H excels at medium ranged ones. The Bulldog features a higher rate of fire, faster muzzle velocity, and tighter hipfire spread compared to the SCAR-H, giving the Bulldog greater killing potential in most circumstances. The SCAR-H, on the other hand, has a slight advantage at range due to its lighter recoil and lower spread increase per shot, along with having a significantly faster reload than the Bulldog, while loaded and when empty. The SCAR-H also the advantage of actually having a faster bullet velocity than the Bulldog when suppressed, potentially making it a better option for stealth-minded players. Both weapons still handle in a similar nature to a DMR, as well as both having a small magazine size of 20 rounds, giving them greater versatility than most other weapons across all ranges but necessitating that the player land as many shots on target as possible before running out of ammo.

The Bulldog can be further optimized for either long range or close range engagements through attachments. Optics primarily remain a matter of personal preference; 3.4x or 4x scopes will generally aid most players with long range engagements, while some may be more comfortable with a Red Dot Sight or Holographic Sight at all ranges. For close quarters, the Bulldog can benefit from the addition of a Muzzle Brake and a Stubby or Potato Grip, dampening its significant vertical recoil without sacrificing all of its accuracy, along with a Laser Sight to further improve its hipfire spread. For longer ranges, a Heavy Barrel will decrease the weapon's base ADS spread at the cost of increased recoil, which can be mitigated with an Angled or Folding Grip, assuming the player bursts or tap fires.

The Bulldog in first-person 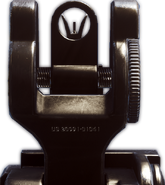 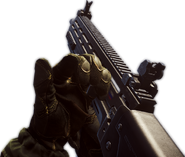 First-person view of its pre-release state, note the lack of iron sights