The Burning Man is a Codex Entry featured in Battlefield 1. It is unlocked upon obtaining 10 kills with the Flame Trooper Elite Class. 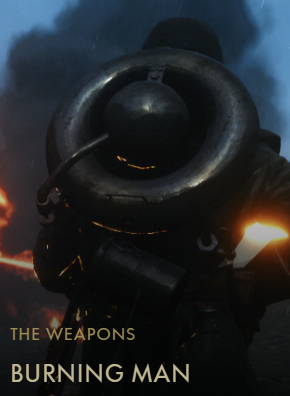 A small portable flamethrower introduced in 1917. It had a doughnut shaped backpack fuel container. Flamethrowers were used even in the early stages of the Great War and spread terror amongst the soldiers. They had a limited range, but they were effective for clearing out forward positions and dugouts preceding infantry attacks. By the ends of the war their use had been extended into an anti-tank role as well.

In the hands of the right soldier this is one of the deadliest weapons in Battlefield 1.

Retrieved from "https://battlefield.fandom.com/wiki/Burning_Man_(Codex_Entry)?oldid=343180"
Community content is available under CC-BY-SA unless otherwise noted.