The Burton LMR is a Codex Entry featured in Battlefield 1. It is unlocked upon obtaining 10 kills with the Burton LMR. 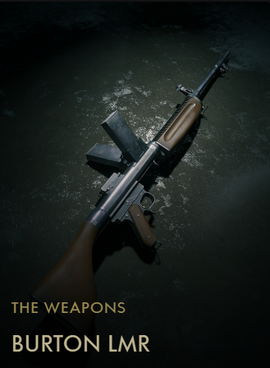 Fired from the observer's seat of an aircraft or on the ground from the shoulder, the Light Machine Rifle designed by Frank Burton was originally intended to shoot down observation balloons. Two vertically inserted magazines (at a 60° angle) could hold up to 40 rounds of the .351 SLR incendiary "Balloon Buster" cartridge. The rifle itself weighed only 10 pounds / 4.5kg and operated with a straight blowback recoil system into the pistol grip, while the open bolt and the corrugated barrel kept the gun cooled. With an attachable bayonet, it would have been America's first assault rifle, but its true potential went unrecognized, as its function as a balloon-killer was deemed obsolete by late 1917.

Retrieved from "https://battlefield.fandom.com/wiki/Burton_LMR_(Codex_Entry)?oldid=343262"
Community content is available under CC-BY-SA unless otherwise noted.