C-Class Airship is a Codex Entry featured in Battlefield 1, introduced in the Turning Tides expansion. It is unlocked upon acquiring ten kills with the C-Class Airship. 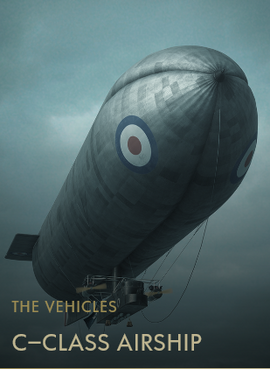 The Astra Torres airships were used by the French Navy and the British Royal Navy at the beginning of the war as scouting vessels to spot enemy troop movements. They were designed for a crew of five in an enclosed gondola, with wireless equipment. The airship itself, designed by Spaniard Leonardo Torres Quevedo and built by the French Société Astra since 1908, was propelled by two 200 hp engines, which gave it a speed of 51 mph. Endorsed by Winston Churchill, then First Lord of the Admiralty, the scouted the British coastline for enemies.

Retrieved from "https://battlefield.fandom.com/wiki/C-Class_Airship_(Codex_Entry)?oldid=358038"
Community content is available under CC-BY-SA unless otherwise noted.