[1]
"DTN-4 (Plastic Explosives). A C-4 charge safely and easily transported, but once armed is susceptible to detonation if handled improperly. It can be attached to most surfaces for easy rigging and setup. An added feature is its ability to be remotely triggered by an operator (command-detonation)."

C4 is a gadget featured in Battlefield: Bad Company 2, functioning similarly to its predecessor, though the player doesn't need to equip the C4 in advance of deploying it.

It can be found on many levels, but it unfortunately does not carry over to the next level in the campaign. When equipped, the player can deploy a maximum of six satchels at a time, and after that, the satchels start to disappear starting with the first one placed. It can be useful against vehicles, bridges and buildings, and can also be a very good smokescreen for the player after it is detonated. The player's C4 will be replenished at ammo crates.

C4 is used by the Recon Kit, or by the Assault Kit when using a weapon unlocked for all Kits, and it is the most powerful explosive available in-game (except for the ATM-00, which has the same damage). C4 can destroy vehicles in one unit, regardless of type or hull integrity, although tanks and IFV's will need two to the front or in corners, or on all sides if it has V ARMOR.

C4 is also useful to take out destructible buildings, as with six C4 (four with Improved Demolitions) the whole building can collapse (assuming they are placed correctly), where as other gadgets do not deal as high damage, are used to individually destroy walls which can alert enemies inside the building. However, depending on the building's location, the player is in risk of being shot before the C4 can be successfully deployed and detonated. 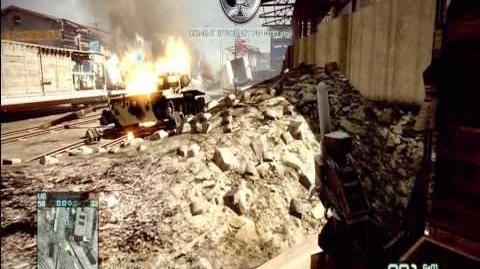 C4 EXPLOSIVE
Gameplay with the C4 in Battlefield: Bad Company 2 on the maps Panama Canal and Heavy Metal
Add a photo to this gallery

Retrieved from "https://battlefield.fandom.com/wiki/C4/Bad_Company_2?oldid=368057"
Community content is available under CC-BY-SA unless otherwise noted.