2.0 - 5.0 meters
"Plastic explosives that stick to most surfaces. Capable of a Mobility Kill on vehicles, and the remote detonator allows for traps and ambushes."

C4 is a gadget featured in Battlefield 4 available for use by the Recon and Support classes. It is a default gadget for the former, whilst the latter must unlock it by reaching a certain class point score cap.

The gadget retains many similarities to its Battlefield 3 counterpart. C4 is fatal to infantry within its blast radius but is not instantly lethal at longer ranges. The Primary Fire button will detonate deployed C4. Secondary Fire is used to deploy, rather than switch between packs and the firing device. Packs can be retrieved (or defused by an Engineer) by holding down the Reload button. A single charge is powerful enough to deliver either a Mobility Kill or Critical Hit Disable on all vehicle types, even those with Reactive Armor specialization equipped. After the Battlefield 4: Community Operations game update, it now requires 3 explosive charges to completely destroy heavy armored vehicles instead of the previous 2. It now also takes 8 seconds to reload post-update instead of the previous 4 seconds. C4 charges can be replenished via Commander Supply Drop or Ammunition Boxes

The C4 shares the same minimap icon and spot icon as the M15 Anti-tank Mine and M2 SLAM. C4 planted on vehicles is immediately spotted for the occupants, and to enemies once spotted. With Destruction, players can use C4 to create passages through certain barriers. This can be useful for flanking or escaping. Explosive objects such as cars and gas tanks can also be turned into large-scale booby traps. The gadget is also powerful enough to create deep craters or potholes in certain surfaces, throwing off aim and creating a hindrance to passing friendly or hostile vehicles or even cause them to become stuck and immobile (a common occurrence with Infantry Fighting Vehicles).

A player can deploy a maximum amount of 6 satchels of C4 on a map at once. Already deployed C4 will disappear when new satchels are placed should the total amount of C4 already deployed be at the maximum amount. C4 can be set off by other explosions, large caliber weapons such as magnum pistols and sniper rifles, 12 gauge slug rounds, frag rounds and grenades, and occasionally by heavy impacts. Using EXPLOSIVES will allow a Recon player to carry up to a maximum of 6 C4 charges, and this also allows all 6 to be placed at once for massive explosions.

Similar to its Battlefield 3 counterpart, recreational players also use C4 to set off piles of explosives to launch heavy vehicles, or trails of explosives, or to turn light transport vehicles in effective VBIEDS (Vehicle-Borne Improvised Explosive Devices)

C4 can also be planted while swimming, which can be useful for destroying boats without being detected.[1]

The following is a list of effects and damage to specific vehicle types from direct-contact explosion from C4 Explosives.

Vehicles not listed are vehicles which are instantly destroyed upon charge detonation. Such includes Quad Bikes, Jets of all types, Helicopters of all types (excluding Transport Helicopter) and RHIB Boats.

Damage results are consistent at all angles of direct-contact detonation. Explosive damage from splash-damage is not included. 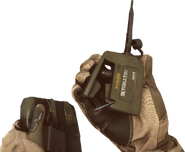 C4 charge and clacker.
Add a photo to this gallery

Retrieved from "https://battlefield.fandom.com/wiki/C4/Battlefield_4?oldid=368995"
Community content is available under CC-BY-SA unless otherwise noted.