C93 Carbine is a Codex Entry featured in Battlefield 1, introduced in the Battlefield 1: In the Name of the Tsar expansion. It is unlocked upon obtaining ten kills with the C93 Carbine. 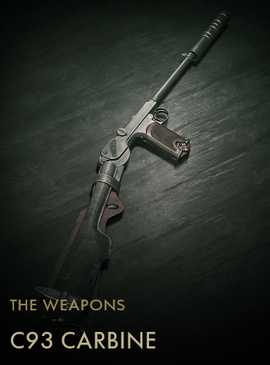 Hugo Borchardt was a German engineer and inventor, most known for designing the C-93 – the world’s first commercially successful semi-automatic pistol. About 3000 C-93’s were sold, but because of a complicated and expensive design it was never adopted by a military force. The pistol protruded behind the grip in a somewhat awkward and bulbous shape which housed the main spring of the gun, and this was arguably the primary weakness of the design. The C-93 was, however, sold standard together with an attachable wooden stock which turned it into a practical, small semi-automatic carbine. The C-93 was tested by the US Navy in 1894, and a newspaper article stated that; “a light adjustable stock may be affixed, making for all practicable purposes a carbine for the cavalry”. But the various militaries that tested the weapon around the turn of the century were mostly looking for an effective handgun. Borchardt also developed a new 7.65x25mm cartridge for the C-93, which would be the inspiration for the 7.63x25mm Mauser, 7.65x21mm Luger Parabellum, and 7.62x25mm Tokarev cartridges. A substantial number of the C-93’s were sold in the USA, where it began to be promoted around 1897, and the Borchardt pistol was listed in gun catalogs in 1905 and 1918-19. A couple of American manufacturers produced ammunition for the Borchardt pistol, and the cartridges kept being produced into the early 1930’s. The Imperial Russian Army, like most others, were testing many automatic pistols in the late 19th century, and some sources claim that 300 of the C-93 pistols were purchased for equipping Finnish army units – Finland at that time being part of Tsarist Russia.

Retrieved from "https://battlefield.fandom.com/wiki/C93_Carbine_(Codex_Entry)?oldid=343216"
Community content is available under CC-BY-SA unless otherwise noted.