The C96 is a weapon featured in Battlefield 1. Two variants are featured in mutiplayer, the C96 Pistol and the C96 Carbine. A silenced variant, the C96 Silencer, can be found in singleplayer. A fourth variant, the C96 Export, is a C96 Pistol with slightly higher damage and less accuracy than the basic C96. It is exclusive to DICE developers, but can also be found on the Community Test Environment.[1]

The C96 Pistol appears in singleplayer as the main weapon of Daniel Edwards in Through Mud and Blood, equipped with a radium sight. The Carbine variant can be found in weapon crates, often with a scope, and is also used by the Ottoman Empire. A C96 Silencer variant also exists, and can be found inside weapon crates in Through Mud and Blood, The Runner, and Nothing is Written.

This item has a Codex entry: C96 Pistol

Symthic
"The C96 pistol was the first semi-automatic pistol ever to be truly commercially successful. It saw widespread use during WW1."

The C96 Pistol fills the role of medium damage, medium rate-of-fire pistol for the Medic kit. The C96 is very similar to the Repetierpistole M1912, which fulfills the same role for the Support kit. However, the C96 can top up its magazine mid-way through, while the Repetierpistole M1912 must eject its remaining rounds. Still, the C96 is the weakest of the class-specific medium sidearms.

It compares more closely to the all-kit pistols, especially the P08.

A special variant that was originally exclusive to DICE employees, but can now be found in the Community Test Environment is the C96 Export. It is visually identical to the normal C96, but is available to all kits, and has a higher damage, a slightly faster damage dropoff and lower control.[1]

The C96 in the Battlefield 1 boxart.

The C96 being fired in the Battlefield 1: Official Gameplay Trailer

The Mauser C96 in the modify menu 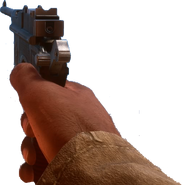 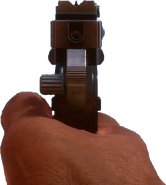 Stripper-clip reload
Add a photo to this gallery

This item has a Codex entry: C96

Symthic
"The Carbine version of the famous C96 pistol, featuring an extended barrel and a shoulder stock."

The C96 Carbine is issued to both the Tanker and Pilot kits as their default primary weapon.

The C96 carbine benefits from higher muzzle velocity over the other carbines, and has good recoil and spread. Although it is the lone clip-loading carbine, it still loads faster than the Pieper M1893.

The C96 Carbine during the Open Beta

Closing the chamber
Add a photo to this gallery

This item has a Codex entry: M1917 Trench Carbine

The M1917 Trench Carbine is a weapon that was introduced in Battlefield 1: Turning Tides expansion for the Assault class.[2] It resembles the C96 Carbine, but with a detachable 40-round magazine and slightly higher damage.

In-game, the Trench Carbine is best suited for mid-close range combat. The weapon features high hipfire accuracy, virtually non-existent recoil, and a high magazine capacity of 40 rounds. It also features the second-highest muzzle velocity of any Assault-class gun, beaten only by the Ribeyrolles. The main downside is that it shoots rather slowly for an Assault-class weapon, being semi-automatic only.

A variant of this weapon is the M1917 Patrol Carbine, added in the Weapon Crate update on May 7 2018. It is equipped with a mid-power scope and has better accuracy when moving.

Reloading the Trench Carbine
Add a photo to this gallery

Retrieved from "https://battlefield.fandom.com/wiki/C96/Battlefield_1?oldid=364204"
Community content is available under CC-BY-SA unless otherwise noted.