The C96 Pistol is a Codex Entry featured in Battlefield 1. It is unlocked upon obtaining ten kills with the C96 Pistol. 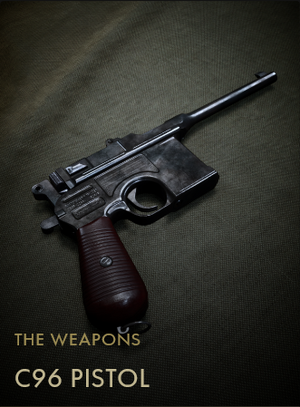 The C96 Pistol was the first semi-automatic pistol ever to be truly successful commercially and see widespread use. Design of the pistol began around 1894 and production began in 1896.

One of the main distinguishing features of the C96 is the fixed magazine forward of the trigger, and early versions of the pistol existed with 6-, 10-, or even 20-round magazines, but soon only the 10-round models were retained. The magazine was loaded via stripper clip, and initially the C96 used the same cartridge developed for the competing C-93, but later another, very similar cartridge was developed.

With its impressive performance and the option of an attachable shoulder stock, the C96 quickly became popular on the civilian market. It was initially offered to the German Army which was not interested, but by the late 19th century the C96 had already been adopted by the Italian Navy, and the Russian and Turkish Armies. It first saw military action in the Second Boer War of 1899 to 1902, where a young Winston Churchhill carried a C96, and claimed it saved his life.

When WW1 broke out, Germany did not have enough of the Pistole 08, so about 150,000 C96 pistols chambered for 9mm were ordered. They were marked with a large "9" on the handle and they saw extensive use in the war, with many German officers preferring the C96 over the P08.

T. E. Lawrence also carried a C96 for a while, and the weapon went on to see action in pretty much every conflict between WW1 and WW2 and beyond. The famous design has been copied extensively around the world.

Retrieved from "https://battlefield.fandom.com/wiki/C96_Pistol_(Codex_Entry)?oldid=343167"
Community content is available under CC-BY-SA unless otherwise noted.