The Galil ACE is an assault rifle developed by Colombia and Israel Weapon Industries (IWI) and manufactured by IWI and also Indumil. The ACE family assault rifles are based upon the reliable mechanism of the famous Galil assault rifle. The ACE incorporates enhanced human engineering and ergonomics with the demands of the modern battlefield.

The ACE 22 variant is the second 5.56x45mm NATO Carbine of the ACE family, having a longer barrel length than the ACE 21 at 330mm and featuring the bayonet lug from the ACE 23 and ACE 52. Like the other variants, it features several modernizations from the original Galil, incorporating a composite build, folding equipment and many accessory-rails.

The ACE 22 appears under the name CAR-556 in Battlefield Hardline.

Symthic
"The design of the CAR-556 borrows from the AK-47 with a modified gas diversion system to help mitigate recoil. The CAR-556 has a larger magazine than many other rifles, giving it a slight advantage."

The CAR-556 (Carbine 5.56) is a Carbine featured in Battlefield Hardline.

The CAR-556 makes a brief appearance on Sovereign Land wielded by Tony Alpert's bodyguards. Notably, these rifles still have their stocks attached, unlike the CAR available in multiplayer. It is never available to the player in the campaign.

The CAR-556 is only available in the Suppression Battlepack given to all players. Unlike most other primary weapons available to the Operator, the CAR-556 has a 40-round magazine by default, the second highest magazine capacity of the Operator weapons behind the ARM and RPK. Its Stock is removed by default and cannot be reattached, unlike most other weapons lacking a stock like the MP5K or MPX. It is equipped by default with a PKA-S holographic sight.

The CAR-556 is a controllable, close-range oriented carbine, possessing a moderate rate of fire, controllable recoil that pulls to the right and vertically, low ADS spread and a large magazine size of 40. The CAR's main downsides is its inaccuracy when fired from the hip and its very short range, with its bullets dropping off in damage at 8 meters, comparatively, most carbines have a dropoff start of around 30 meters. The CAR's damage drop ends at the usual 50 meters, however, so it's primarily less effective than the other carbines at medium ranges.

This means that the CAR will need significantly more bullets to kill players at moderate or long ranges than most other Assault Rifles and Carbines, and is among the group of Carbines that act more like Submachine guns, functioning closest to the AKS-74u and RO933. Compared to these two, the CAR posses lighter recoil, a much larger magazine, and decent performance at medium range compared to the AKS; the RO933 has a superior firerate and is better in its general performance at range, while the AKS has the highest max damage and lowest spread increase, but shortest effective range of the trio.

When customizing the CAR-556, the player can opt to either further improve its ability in close quarters or make it more effective at range. For close ranges, a Laser Sight and Vertical Grip will tighten the CAR's hipfire and reduce its spread when not aimed, making it all around more effective when fired from the hip, and a Muzzle Brake will reduce side-to-side recoil when aiming. Alternatively, a Suppressor can be equipped to stay off the minimap at the cost of reduced muzzle velocity, which is an acceptable trade-off for the CAR in close quarters, or a Flash Hider can be used to hide the weapon's muzzle flash while having no negative attributes.

For longer ranges, a Heavy Barrel can be used to tighten the CAR's spread while stationary and reduce all recoil by 20%, while a Compensator will specifically reduce vertical spread. The CAR benefits most from a Stubby Grip for long ranges, as the Angled Grip will only provide lowered recoil for the first shot; since the CAR requires a considerable amount of shots to kill at range, more controllable bursts with the Stubby are generally more useful for killing enemies than single-shots with the Angled.

Optics are a matter of player preference, but low magnification sights can generally be more useful than higher magnification scopes due to the CAR's short range. 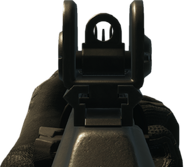