The CBJ-MS is a submachine gun developed by Swedish company CBJ Tech AB. It is chambered for both 6.5×25mm CBJ-MS and 9×19mm cartridges.

The CBJ-MS is an unlockable PDW in Battlefield 4.

The CBJ-MS is found in Baku as a collectible weapon. It rests on the red beams above the entrance of the factory. It is equipped with a Tactical Light and Muzzle Brake and sports a Splinter Woodland camouflage.

The CBJ-MS is the third unlocked PDW in multiplayer.

It performs similarly to the PP-2000, having the same damage and a large magazine capacity. Compared to the PP-2000, it has higher side-to-side recoil, but has a higher rate of fire, and six more rounds in its magazine. Hip fire with the CBJ-MS is by far above average for a PDW, even while sprinting the crosshairs will remain tight. It also has a very high bullet velocity, making it easier to hit enemies at range, and making it well-suited to using a Suppressor. A Compensator would also be useful, reducing the horizontal recoil.

The CBJ-MS in first person 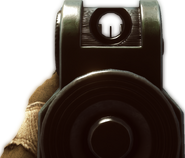