The CS/LR4 is a Chinese bolt-action sniper rifle designed & manufactured by Norinco. It fires the Western 7.62x51mm NATO cartridge instead of the more traditional 5.8x42mm Chinese round. It is also relatively accurate, capable of 1 MOA at 300m & a minimum range of 600m.

The CS/LR3, or FY-JS as known in Battlefield 4, is a variant of the CS/LR4 that is chambered to use the lighter 5.8x42mm cartridge.

Two variants of the CS-LR4 are featured in Battlefield 4. 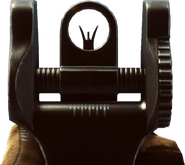 The FY-JS appears in the singleplayer and multiplayer of Battlefield 4.

The FY-JS is the standard sniper rifle for the PLA and is seen in Singapore and Kunlun Mountains; used by snipers at the end of each mission. It is equipped with the Hunter, Canted Ironsights, Flash Hider and Straight Pull Bolt. It sports a Hexagon Naval finish.

The FY-JS is unlocked upon the completion of the Recon Expert gold tier assignment. The bullets from the FY-JS drop at the same rate of the SRR-61, but also has the third highest muzzle velocity at 630 m/s. Like all bolt-action sniper rifles, it can take out an enemy at close range with one hit, but like the Scout Elite, it takes up to three hits to kill at range. 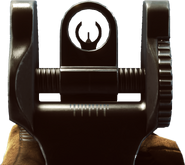 Retrieved from "https://battlefield.fandom.com/wiki/CS-LR4?oldid=362869"
Community content is available under CC-BY-SA unless otherwise noted.