The Scorpion is exclusive to the Mechanic kit for both factions, and posses a very high rate of fire and a quick reload speed, allowing it to preform admirably in close quarters. However, its damage drops off quickly and it has moderate recoil, making it less effective at range. 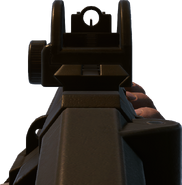