The CZ 75 is a semi-automatic pistol made by Česká zbrojovka Uherský Brod (CZUB) in the Czech Republic. First introduced in 1975, it features a staggered-column magazine, double-action trigger, and is based off the Browning High-Power design. It can be chambered in either 9x19mm or 40 S&W.

The variant featured in the Battlefield series is the SP01 Shadow; a modern variant developed through the suggestions made by law enforcement and military forces worldwide.

The CZ-75 is a pistol featured in Battlefield 4. The pistol fires .40 S&W rounds, rather than the 9x19mm of most other pistols. It has a capacity of 12 rounds (11 in the magazine and one in the chamber) and has a very slightly lower rate of fire than most pistols. It makes up for this by having a higher damage over range, with its damage not dropping until 12.5 meters. It also has slightly lower recoil than other handguns.

In Hardcore, the CZ-75 is capable of a two-shot kill at close range due to its unique damage figure, unless the enemy has body armor. It will still be able to kill in one headshot. 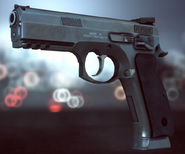 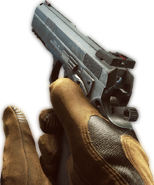 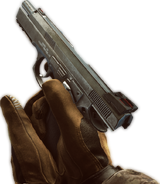 34 - 25
"The CZ-75 features a staggered column magazine and a double-action trigger. The CZ-75 has the most consistent unaimed fire accuracy in its class."

The CZ-75 is a pistol featured in Battlefield Hardline. It is purchasable for the Criminal Operator kit, and has the highest damage in its class, at the cost of the smallest magazine capacity, tied with the P226. It also has the highest hipfire accuracy in its class.

Retrieved from "https://battlefield.fandom.com/wiki/CZ-75?oldid=362861"
Community content is available under CC-BY-SA unless otherwise noted.